Leicester City’s defensive frailties have cost them several points this season. The Foxes have conceded 43 goals because of their shaky defense. While they have been poor defensively, they have been unlucky with injuries as well, a scenario that has added to their problems. Since their win against Liverpool in December, Leicester’s form has declined massively, as they have picked up just two points in their previous five league matches. A defeat against Burnley would have put huge pressure on Brendan Rodgers.

However, Rodgers’ composure and tactical prowess helped his side to come out on top at Turf Moor. The timely substitution of a returning Jamie Vardy inspired Leicester to a 2-1 win against Burnley. Coming off the bench in the 72nd minute for his first appearance of the year, Vardy took just 18 minutes to turn the game on its head. Not only did he set up Maddison for the opening goal, but he also sealed the win with a header from close range.

Following a hamstring injury in December, Vardy had missed out on action for over two months. His performance at Turf Moor shows that the veteran striker is still as instrumental for Leicester as he has been since his arrival at King Power Stadium. Since his debut in the Premier League in 2014, Vardy has arguably been the Foxes’ most consistent performer. Despite missing out for two months, the 35-year-old is still Leicester’s top scorer in the league with ten goals.

His arrival could prove to be a massive boost for Brendan Rodger’s side as they look to climb up the league table. While the prospects of a European spot are looking bleak at the moment, Leicester would be hoping to finish in the top half of the table at the very least.

Let’s take a look at some stats to gauge if he could propel Leicester to a top-half finish. 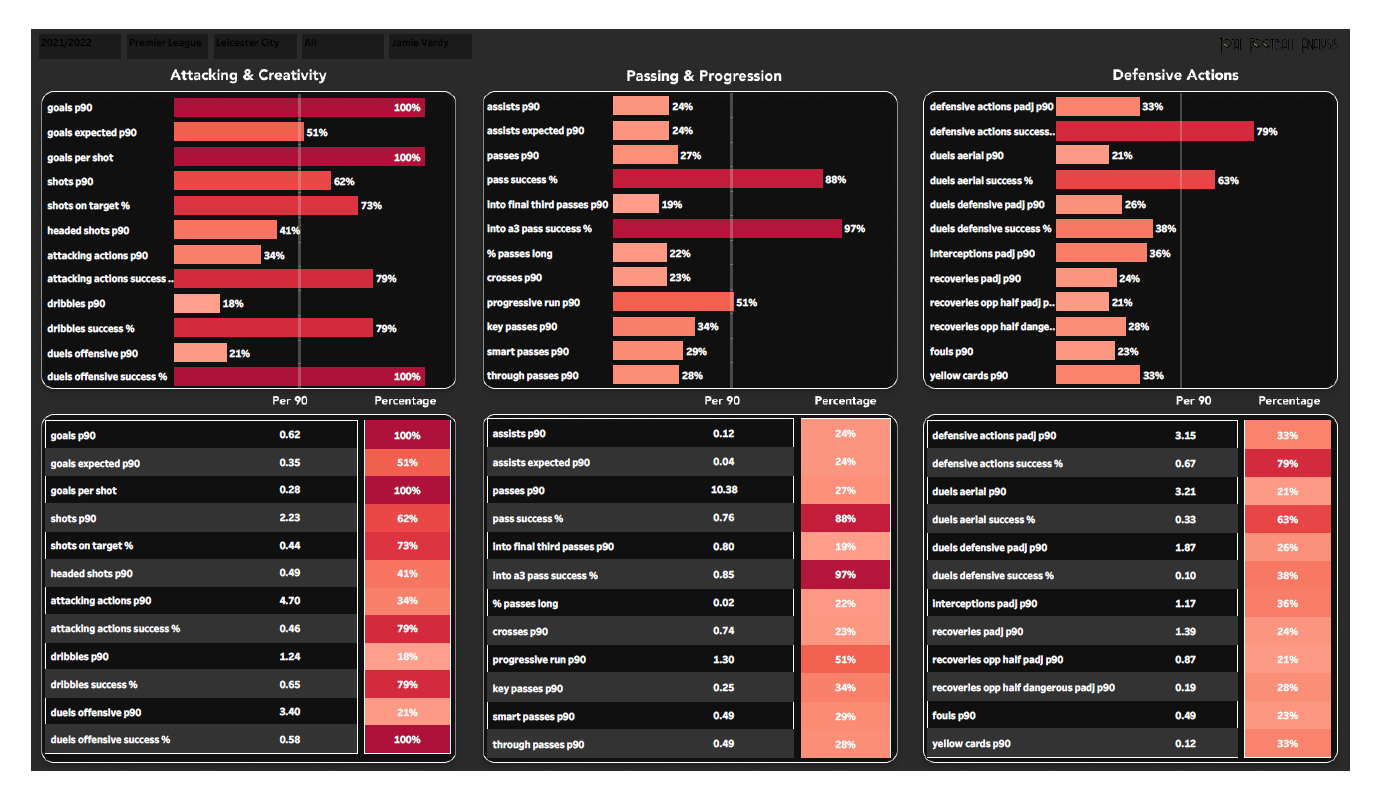 In the above viz., we can see Vardy’s overall stats in the league this season. The 35-year-old has scored 12 goals in all competitions. We can see that most of his attacking stats are above the league median, with the most notable stats being goals per 90 and goals per shot. Vardy ranks in the 88th percentile in terms of passing success rate. Vardy’s game is based on taking a few touches of the ball before shooting at the goal. The 35-year-old uses his explosive pace to effectively hold his line with the opposition defenders before charging into the box with a well-timed run. 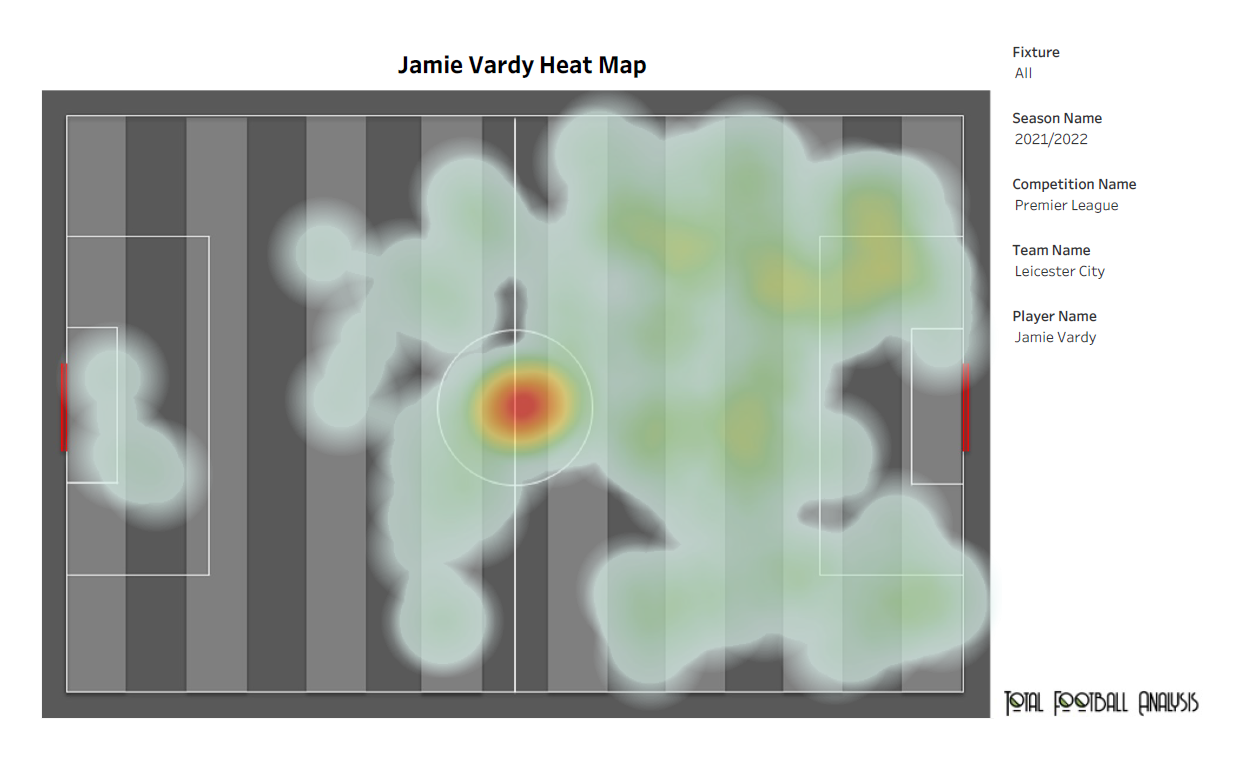 In the above viz., we can see Vardy’s area of activity this season. Under Brendan Rodgers, Vardy is given the freedom to remain in high areas near the opposition’s penalty box. His responsibility is to provide the end product for his team’s build-up play. The above viz. highlights that his area of activity is spread out across the opponent’s half. Vardy is usually not too involved in the build-up play and is mostly at the receiving end of a threatening pass. 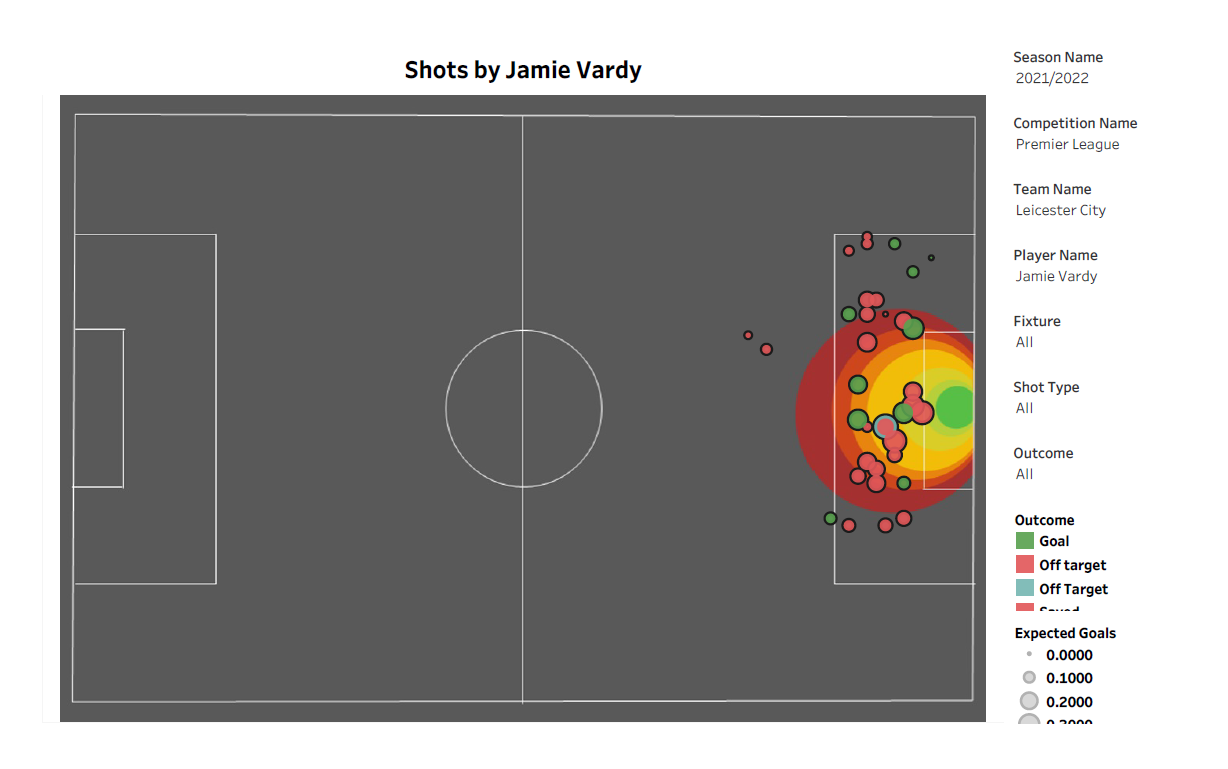 The above viz. highlights the locations of shots taken by Vardy this season. We can see that most of his shots are taken from inside the opposition’s box. The vast majority of his goals have also been scored from inside the penalty area. Vardy is an instinctive finisher and he is adept at locating spaces between the defenders. His pace and acceleration have not declined much despite being at the back-end of his career.

Vardy’s return from injury is a boon for Brendan Rodger’s side. Leicester’s win ratio is much higher with Vardy in the team. His form and stats indicate that he could inspire Leicester to a top-half finish.