Injuries have plagued Leicester City since the start of the season. In addition to some absences due to short-term injuries, the Foxes have had many starting XI players unavailable due to long-term injuries. However, the injury situation has finally started to improve, as many long-term absentees have finally made their returns in recent matches. Following the international break, Brendan Rodgers could have his preferred first-choice squad since the start of the season. Barring any injuries during the international break, Leicester City will have nine defenders available for the first time since the end of last season. Long-term injury absentees, Wesley Fofana, Timothy Castagne, and Jonny Evans could all be available for the upcoming match against Manchester United after the break.

The news will come as a sigh of relief for the Foxes fans, as they have seen their team struggle to put up performances as a result of the injuries. After the recent 2-1 win against Brentford, Rodgers admitted that the situation has improved a lot and that the returning players would provide ‘energy’ and ‘freshness’ to the team. The Northern Irish manager remains optimistic that his side could finish the season well. They are currently placed 10th in the Premier League with 10 wins, six draws, and 11 losses in 27 matches. While they are virtually out of the contention for a top-four finish, the Foxes could still realistically challenge for a European spot provided that other teams drop points.

After the international break, barring any new injuries, Rodgers could have a selection headache, albeit a good one, as only three squad members would remain sidelined. The returning players would provide Leicester with the depth to succeed in their upcoming matches ahead of a busy schedule.

Let’s take a look at some stats to gauge how Rodgers’ ideal lineup could shape up after the international break. 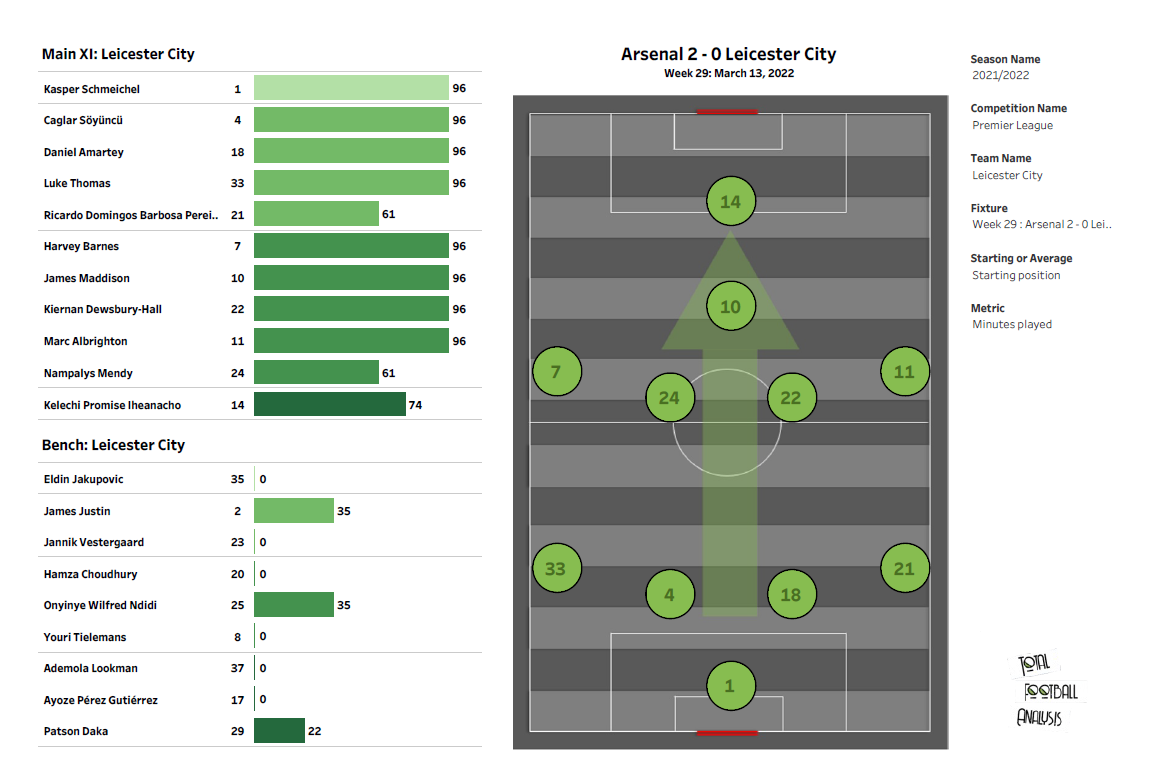 In the above viz, we can see the lineup in Leicester’s 0-2 loss against Arsenal in the Premier League. Since the past month, Rodgers has deployed a 4-3-3, a 4-4-1-1, or a 4-2-3-1 formation for the most part. Daniel Amartey and Caglar Soyuncu have occupied the two centre-back slots, with Luke Thomas, James Justin, and Ricardo Pereira rotating in the full-back roles. Wilfred Ndidi before he was injured, Kiernan Dewsbury-Hall, Boubakary Soumare, and Youri Tielemans have been deployed in the midfield, while Harvey Barnes, Marc Albrighton, Ademola Lookman, and James Maddison have been the preferred wingers. Kelechi Iheanacho and Patson Daka have been rotated as the centre-forwards. 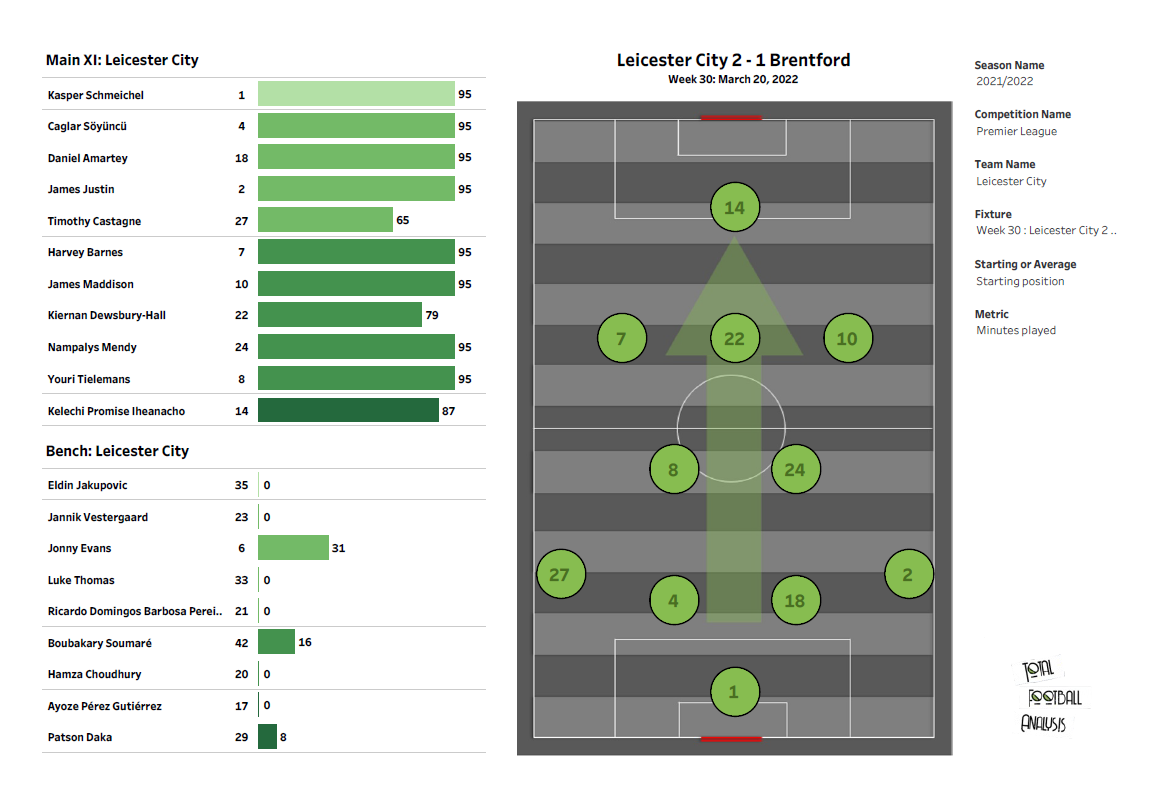 The above viz displays Leicester’s lineup in the recent 2-1 win against Brentford. Leicester lined up in a 4-2-3-1 formation. Timothy Castagne made his return after a long lay-off due to an injury. He replaced Luke Thomas as the left-back, while James Justin was deployed as the right-back. Amartey and Soyuncu continued as the two centre-backs. Tielemans and Mendy were the two central midfielders, while Dewsbury-Hall was deployed as a number 10. Barnes and Maddison were chosen as the two wingers, with Iheanacho taking his place as the striker. 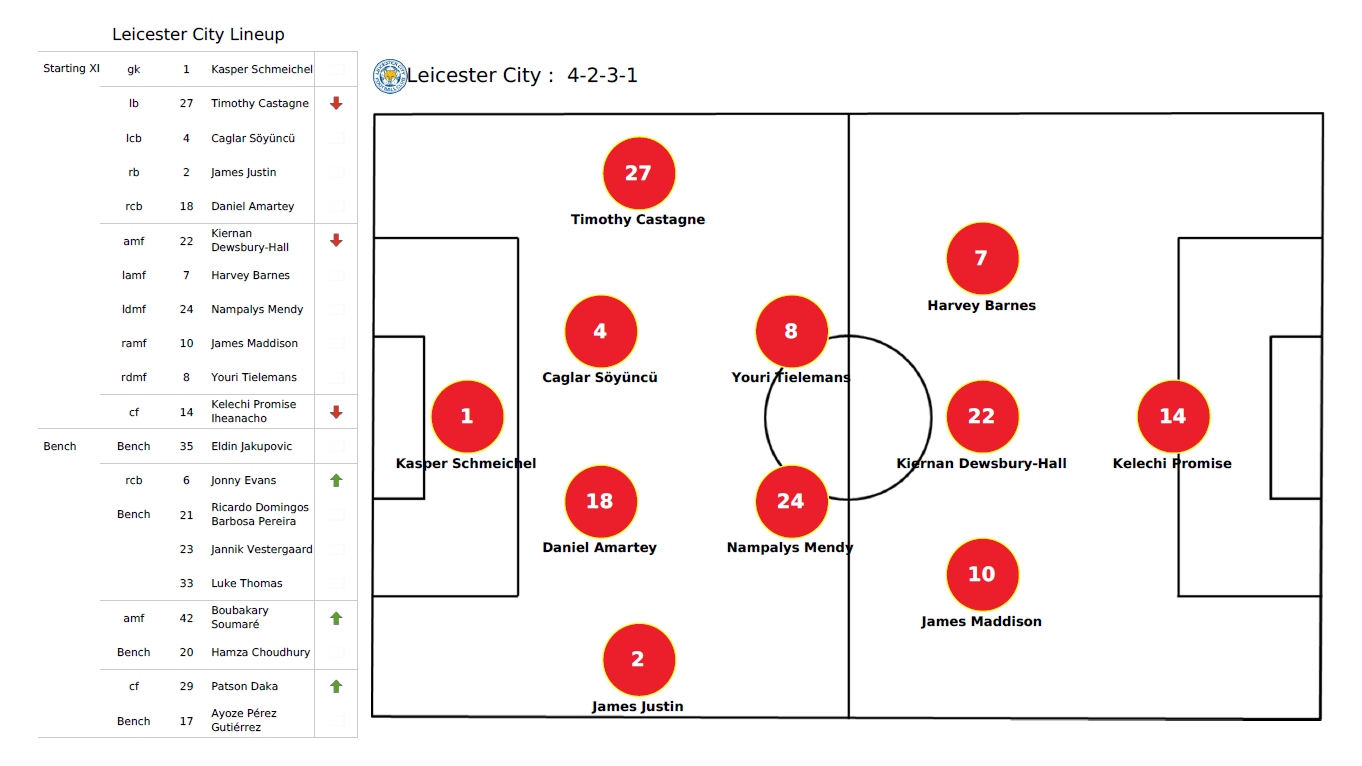 For the centre-back spot, Rodgers would have five options after the international break – Amartey, Soyuncu, Vestergaard, Fofana, and Evans. Out of these options, Fofana and Evans could be brought back into the fold as they are Leicester’s best centre-back partnership, with Amartey and Soyuncu rotating. Rodgers will also have two options each for the full-back spots – Castagne and Thomas rotating as left-backs, while Justin and Pereira as right-backs. In the above viz, we can see Castagne and Justin were deployed as the two full-backs. Justin, in particular, was sharp against Brentford, as he was given the freedom to advance on the right flank, with Maddison drifting inside. With Ndidi out, Mendy should replace the Nigerian in the midfield, with Dewsbury-Hall keeping his place. Rodgers could also go back to his former midfield setup, with Tielemans and Dewsbury-Hall both in deep roles while Maddison coming in as a number 10. Harvey Barnes should keep his place on the wings, with Vardy, Iheanacho, and Daka the available options for the centre-forward role.

The returning players should provide Leicester the sharpness that they have been missing throughout the season, specifically in defense. The upcoming matches will be crucial if the Foxes are to make a strong case for a finish in the European spot.