Following his return in the match against Burnley after a spell on the sidelines, Leicester City’s veteran striker, Jamie Vardy, picked up another injury in the 1-0 win against Leeds. Vardy, who is currently the Foxes’ joint top scorer, could be out of action for at least a month. The 35-year-old has been a regular source of goals for the Foxes since he arrived at the King Power Stadium. Now at the back end of his career, injuries have become a common occurrence for Vardy, a scenario that has often left Leicester with fewer attacking options.

In the absence of Vardy, Brendan Rodgers has rotated Patson Daka and Kelechi Iheanacho in the role of centre-forward. However, both of them have failed to match up with the 35-year-old’s goal tally. Daka has scored four goals and registered three assists in 14 Premier League appearances, while Iheanacho has found the net twice and made five assists in 18. While both the forwards have demonstrated their quality, the duo would need more consistent performances if they are to measure up to the standards set by former England striker.

After Leicester’s recent 0-2 defeat against Arsenal, Rodgers commented that both the forwards offer a different set of attributes while leading the line. He also expressed that in an attacking 4-3-3 setup, Iheanacho is more effective than Daka as he can play in between the lines, while Daka offers more when the team is aiming to stretch the line and get in behind. The Northern Irish manager has likened Daka to the veteran striker Vardy.

While Rodgers has rarely deployed two centre-forwards, doing so could perhaps provide Leicester with the attacking edge that they have lacked from their main strikers in recent games. Iheanacho has displayed that he is more effective as part of a front-two setup. His performances and goal tally during the second half of last season, where he played alongside Vardy, were remarkable.

Let’s take a look at some stats to gauge whether Iheanacho and Daka’s partnership in a front-two setup could provide Leicester with goals. 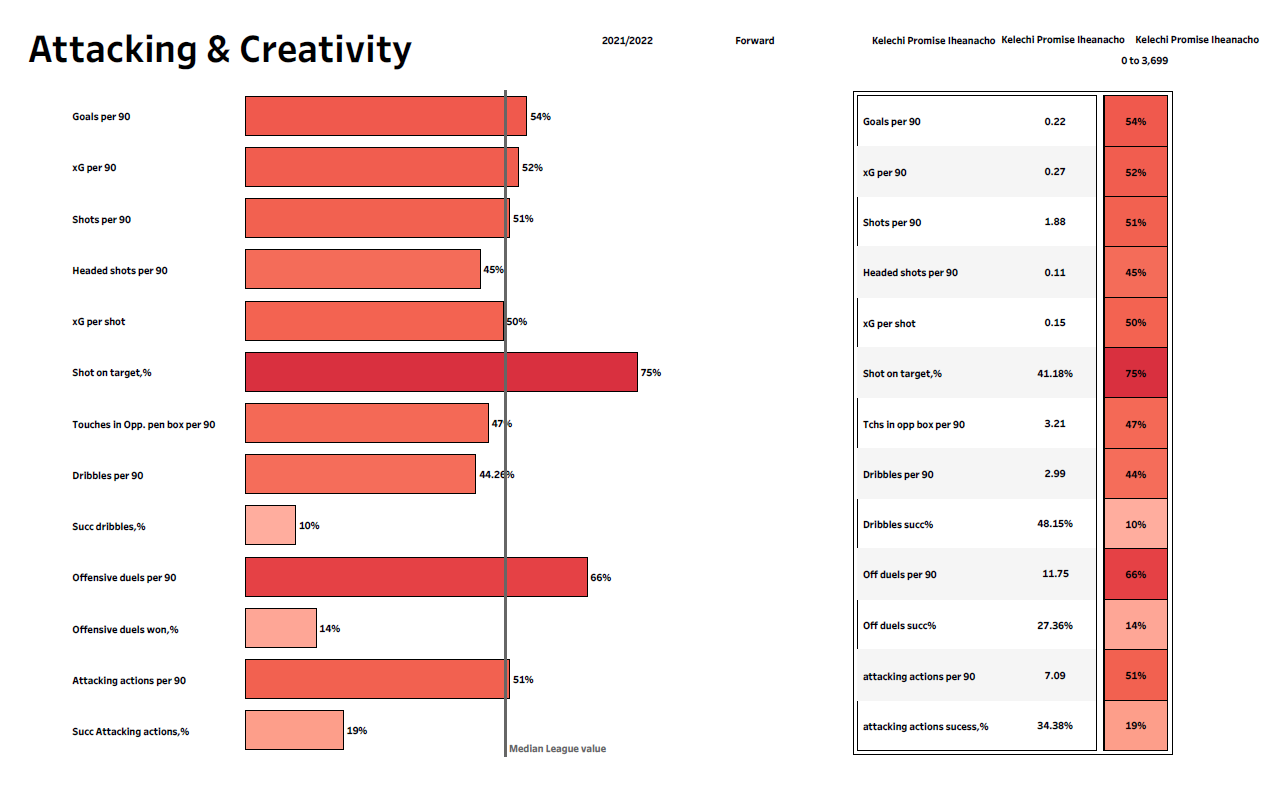 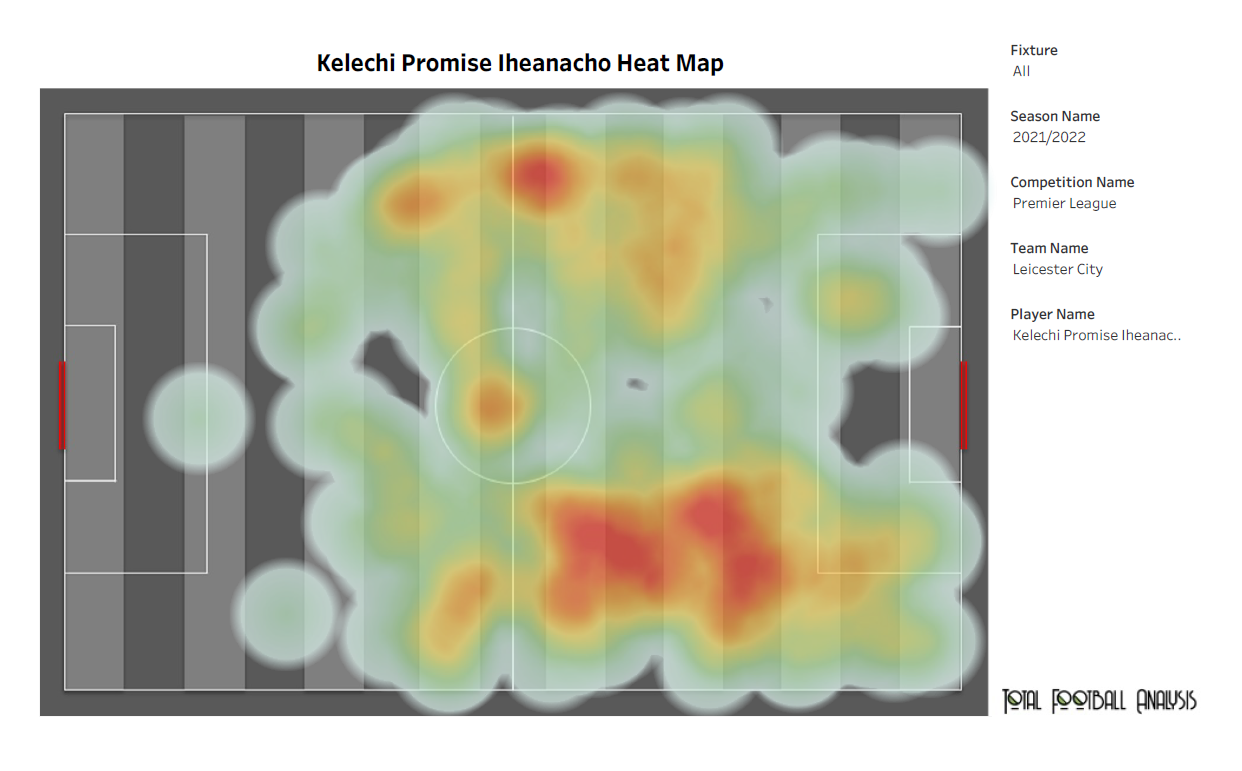 The above viz. displays the locations on the pitch where Iheancho is active. We can see that he has mostly occupied the half-spaces on the right wing. Iheancho likes to drop deep to link up with the midfielders. A common occurrence of Iheanacho’s partnership with Vardy last season was the English striker’s darting runs down the left flank, cutting inside and assisting Iheanacho. Their individual runs on the left and right flank stretched the opposition defense, allowing Leicester’s midfielders spaces to move near the box. 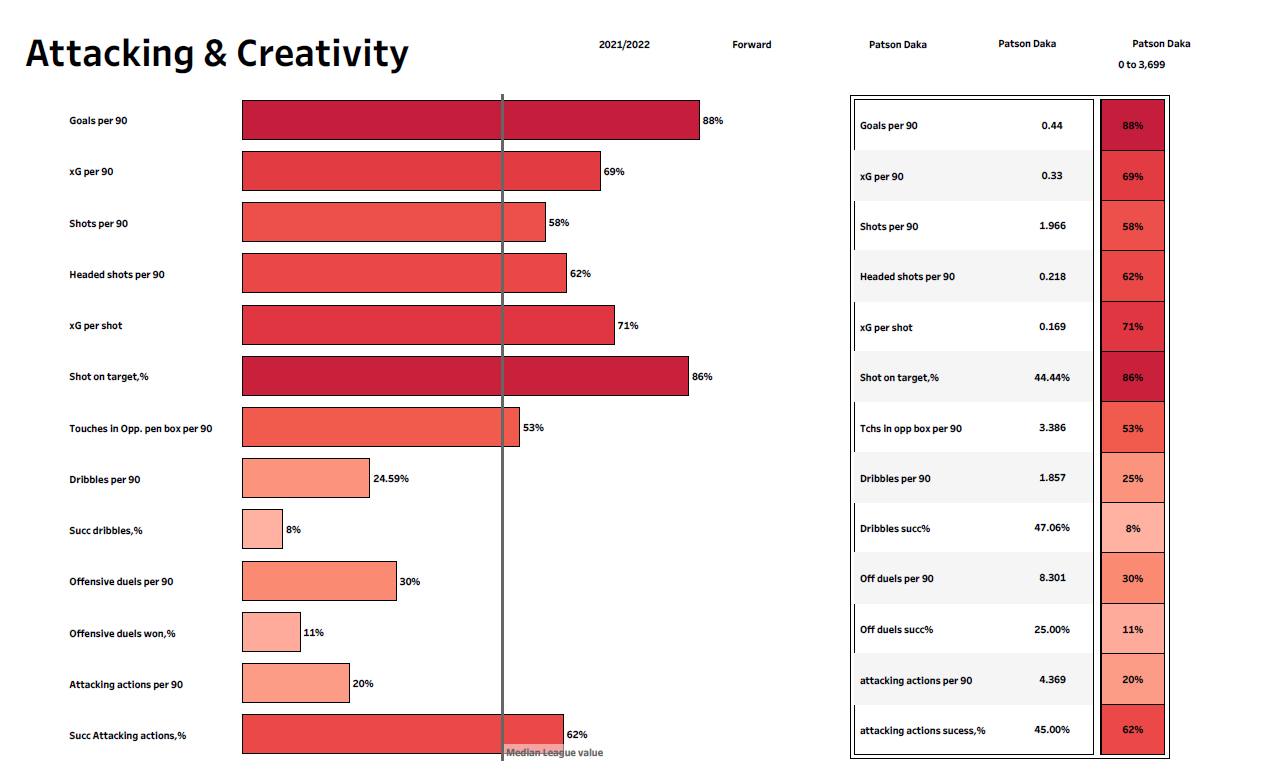 Daka’s attacking & creativity stats are displayed in the above viz. The Zambian is in the 88th percentile for goals per 90, while he is in the 86th percentile for shot accuracy. Similar to Iheanacho, Daka’s attacking & creativity stats have been average. However, the 23-year-old is having his first full season in the Premier League, and he is still maturing as a striker. 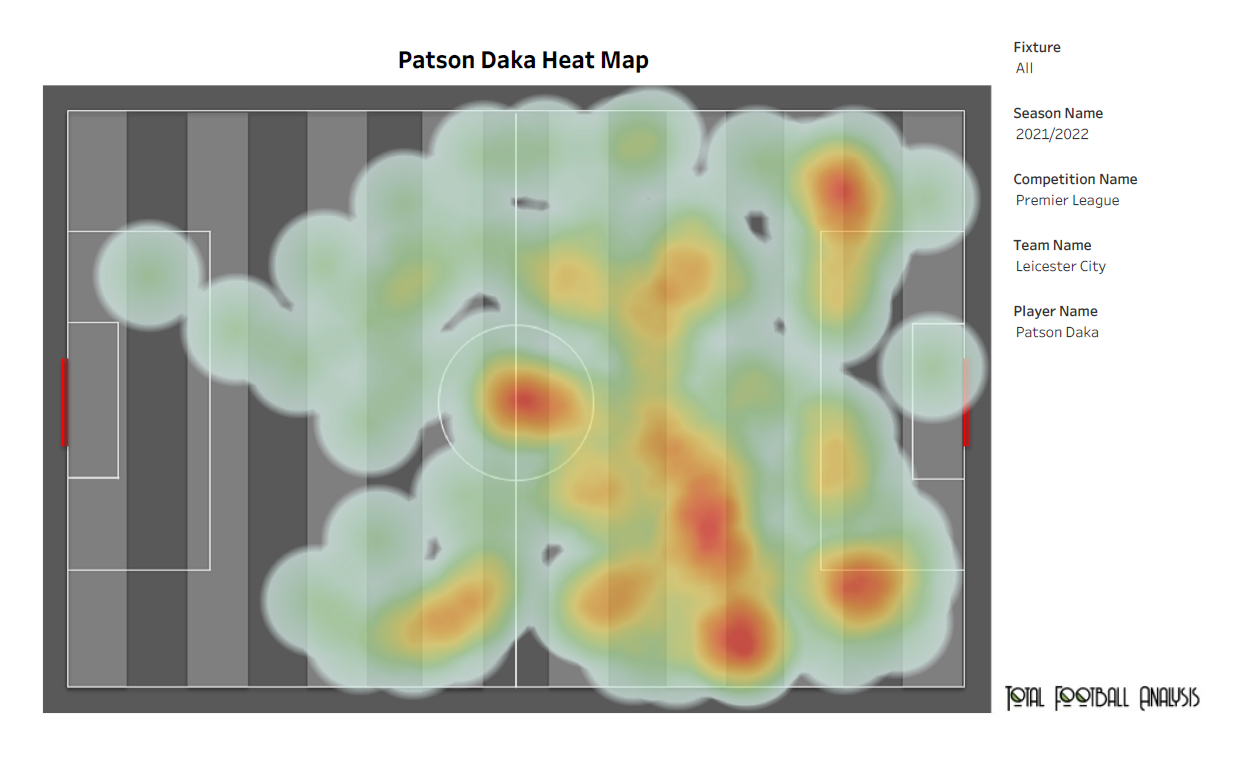 We can see Daka’s area of activity in the above viz. He has occupied multiple spaces in the opponent’s half. Daka possesses an explosive pace, utilizing his mobility effectively. His game awareness allows him to time his diagonal runs and pick up a through ball. Daka’s style of play is similar to Vardy, and the Zambian striker has already partnered Iheanacho and Vardy this season. Daka has been effective in a two-man setup.

Pairing Daka and Iheanacho upfront could re-create Vardy and Iheanacho’s chemistry and goal output for Leicester City. While their chances of finishing in the top-four are virtually over, the Foxes can still finish the season strongly.