Leicester City signed Boubakary Soumaré from Lille at the start of the English Premier League 2021/22 season. He is a 23-year-old midfielder who has a defensive mindset and likes to operate in front of the defensive line. The player was a regular for Lille in the previous season and helped them to secure the Ligue 1 2020/21 title. He thought of gaining more experience in different leagues. However, things didn’t happen like the player wished for, and he struggled a bit in his first season with the Foxes. The Frenchman was unable to cement his place in the starting XI, and Leicester City are now looking to offload him. They are disappointed with his performances and want a new player to replace him. The youngster would also prefer a move away for more game-time next season. Last season was his first season in one of the toughest leagues in the world. Soumaré appeared in a few matches, and the stats below show how he performed last season in the limited game-time.

Soumaré made 19 appearances in the English Premier League and 12 came off the bench. He was unable to open the scoring for his new club in every competition. Soumaré provided an assist in one of the matches, and that was his only goal-scoring contribution last season. The above viz shows that the player stayed in the midfield and covered a lot of areas in the middle third. His average position shows that he was asked to play as a defensive midfielder and, hence, his positioning was inside the opposition’s half. 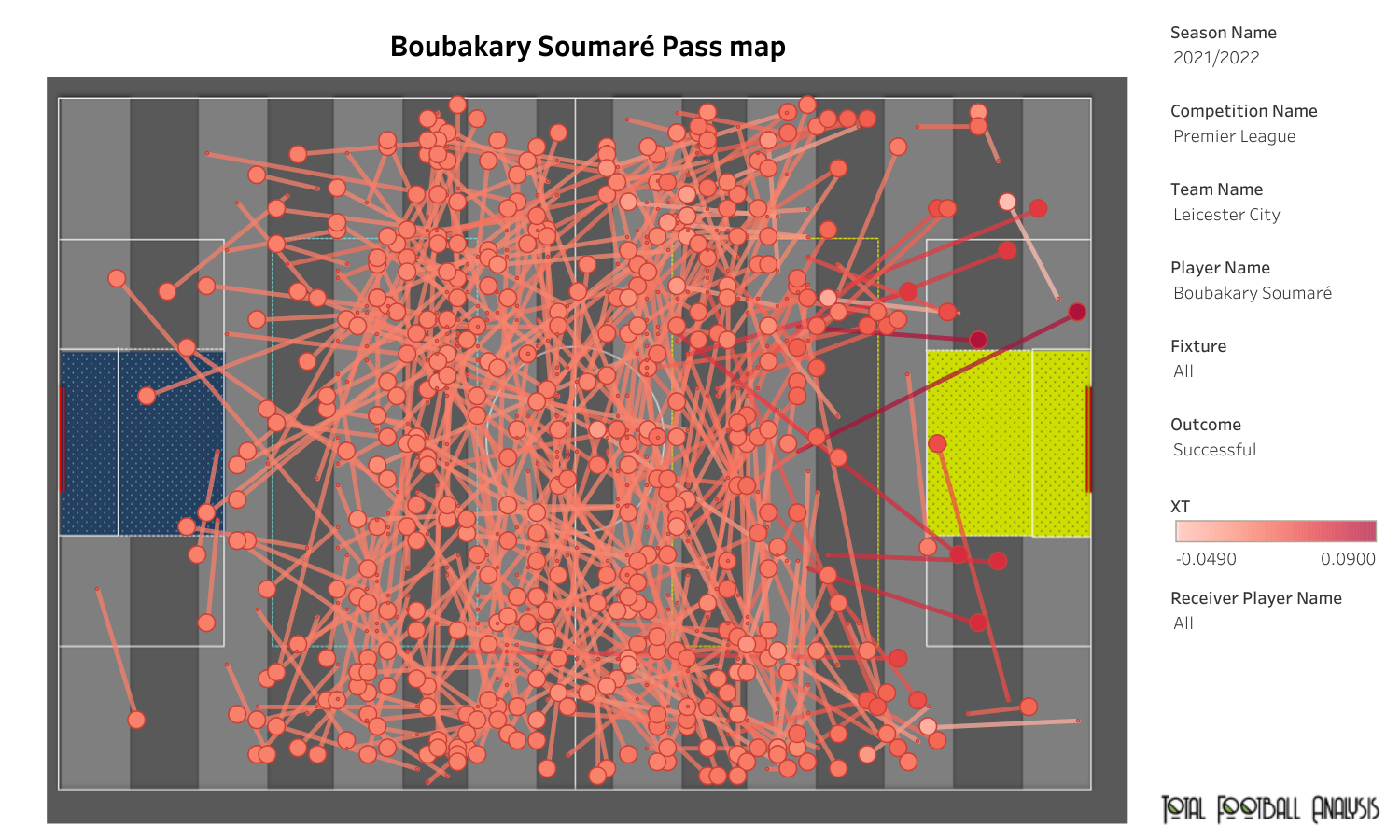 The midfielder averaged 39.03 passes per 90 minutes with an accuracy rate of 85.77%. These passes included 10.1 forward passes per 90 minutes. The above viz shows all the passes that were successfully delivered by the player. It shows that Soumaré built the play from the back and found some teammates in the attacking third with some long passes attempted from the middle third. He found the wide players or the overlapping full-backs with passes over the heads of the defenders. This shows that Soumaré can create plays with his passing and keep his team on the front foot. 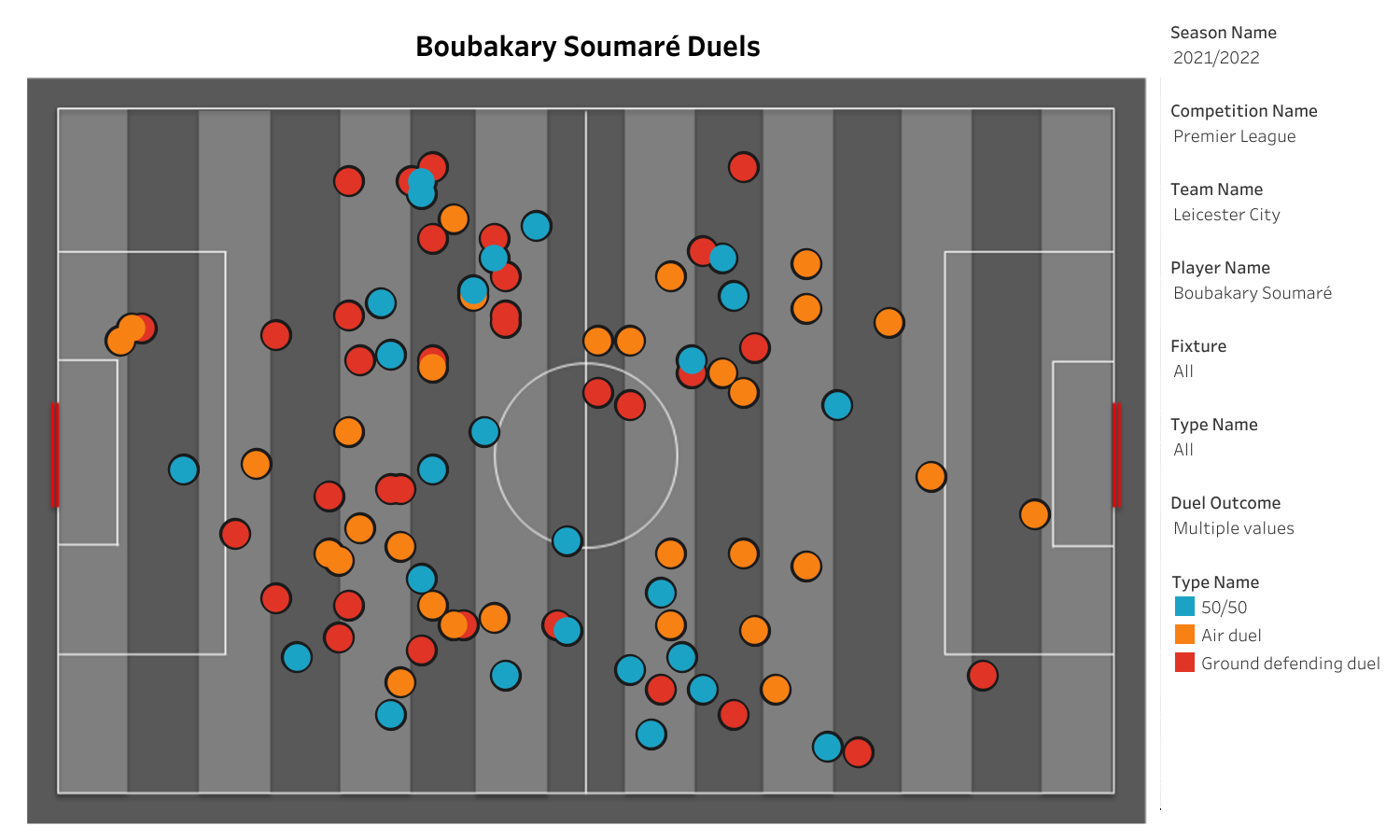 Soumaré’s defensive contributions included 9.4 defensive actions per 90 minutes, with a 72.8% success rate. He contested 5.4 defensive duels, 2.9 aerial duels, and 3.75 loose ball duels per 90 minutes. The win percentage for the player was 25% for defensive duels, 74.36% for aerial duels, and 26% for loose ball duels. The above viz shows all the duels that were won by the player or the duels that ended in a neutral result. Soumaré won most of the duels in the middle third and in front of the defence. He also won a few duels inside the opposition’s penalty box. 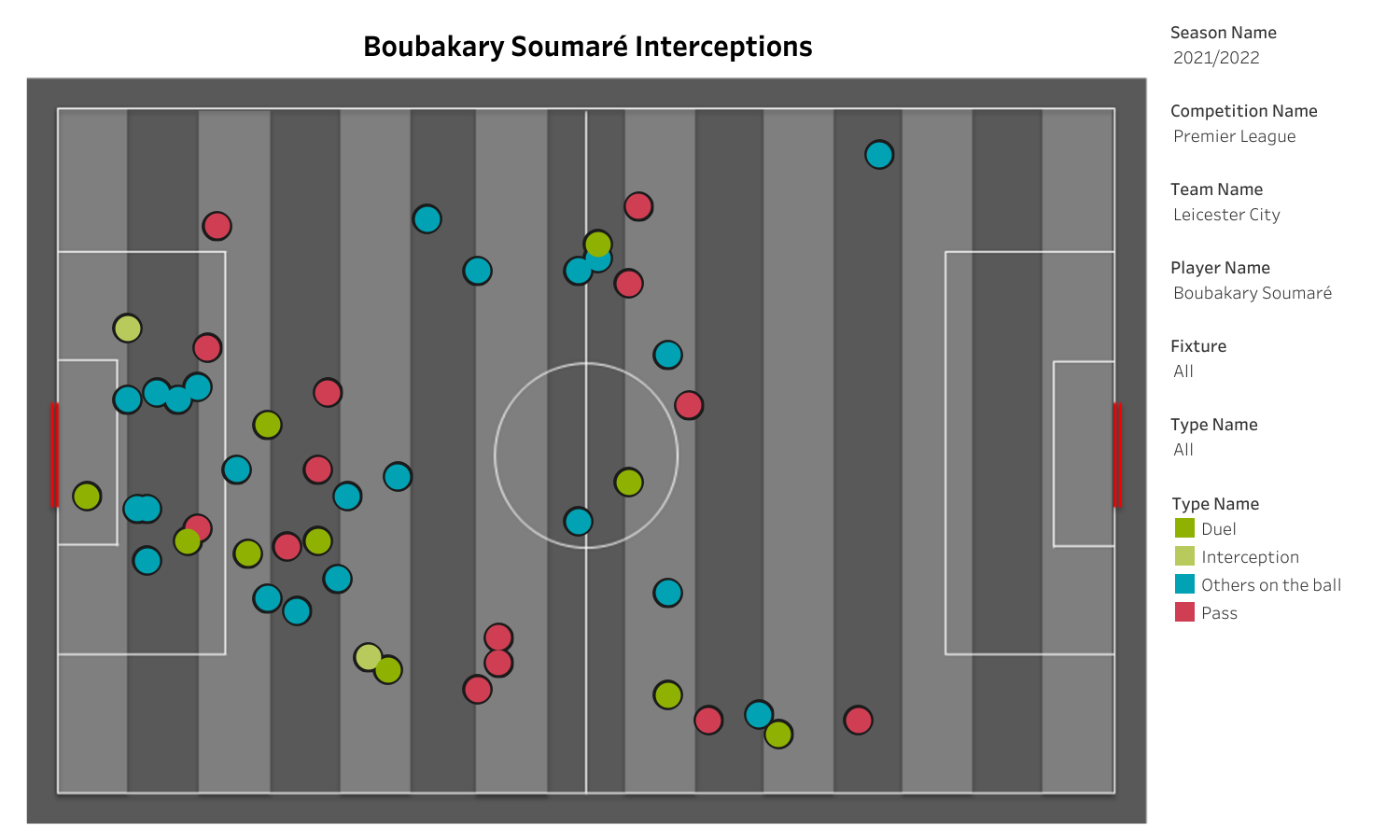 Boubakary Soumaré had a decent first season in the English Premier League. He played as a defensive midfielder and tried to control the midfielder. The Foxes might keep him and try again next season. Soumaré’s situation is a bit dicey, and his transfer will only happen if Leicester City find an ideal player to replace the youngster.