Ryan Bertrand left Southampton in 2021 and joined Leicester City. The 32-year-old was unlucky as injury affected his game-time, and the left-back only made four appearances for the Foxes in the English Premier League. He started his career at Chelsea in 2006 but was sent on various loan moves. In 2015, he made a switch to Southampton after winning the UEFA Champions League, UEFA Europa League and three FA Cups. Now, the player is towards the end stages of his career and will try for another piece of silverware before hanging up his boots. He will be eager to return to first-team football and some of the stats below show how the player could provide strength to Leicester’s defensive line. 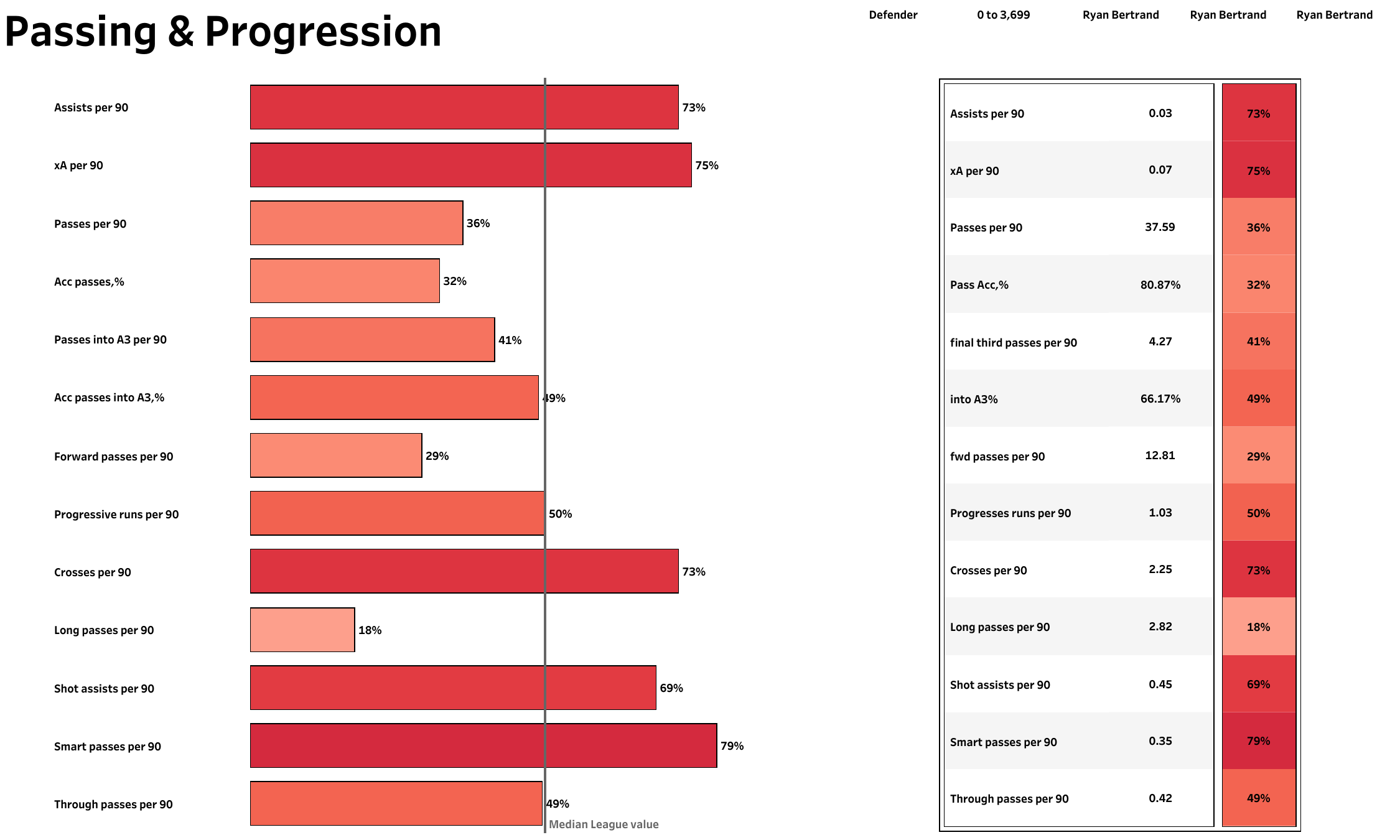 The above viz shows the passing stats of the full-back in the 2020/21 season. When looking at the above chart, the general rule is that the longer the bar, the better the performance — you can see the league average in the middle, and the % is the percentile rank the player is in. Bertrand had a low percentile rank for passing when he was playing for Southampton. The Saints could not hold the ball, which was the primary reason Bertrand is ranked low for attempting passes. Bertrand provided more than two crosses per 90 minutes and had a high percentile rank amongst other defenders.

Last season, he averaged 36.45 passes per 90 minutes with an accuracy rate of 85.3%. He also attempted more passes into the attacking third of the opposition and averaged 5.45 passes per 90 minutes with a high accuracy rate of 91%. The number of crosses dipped a bit as the full-back started to create plays from grounded passes. 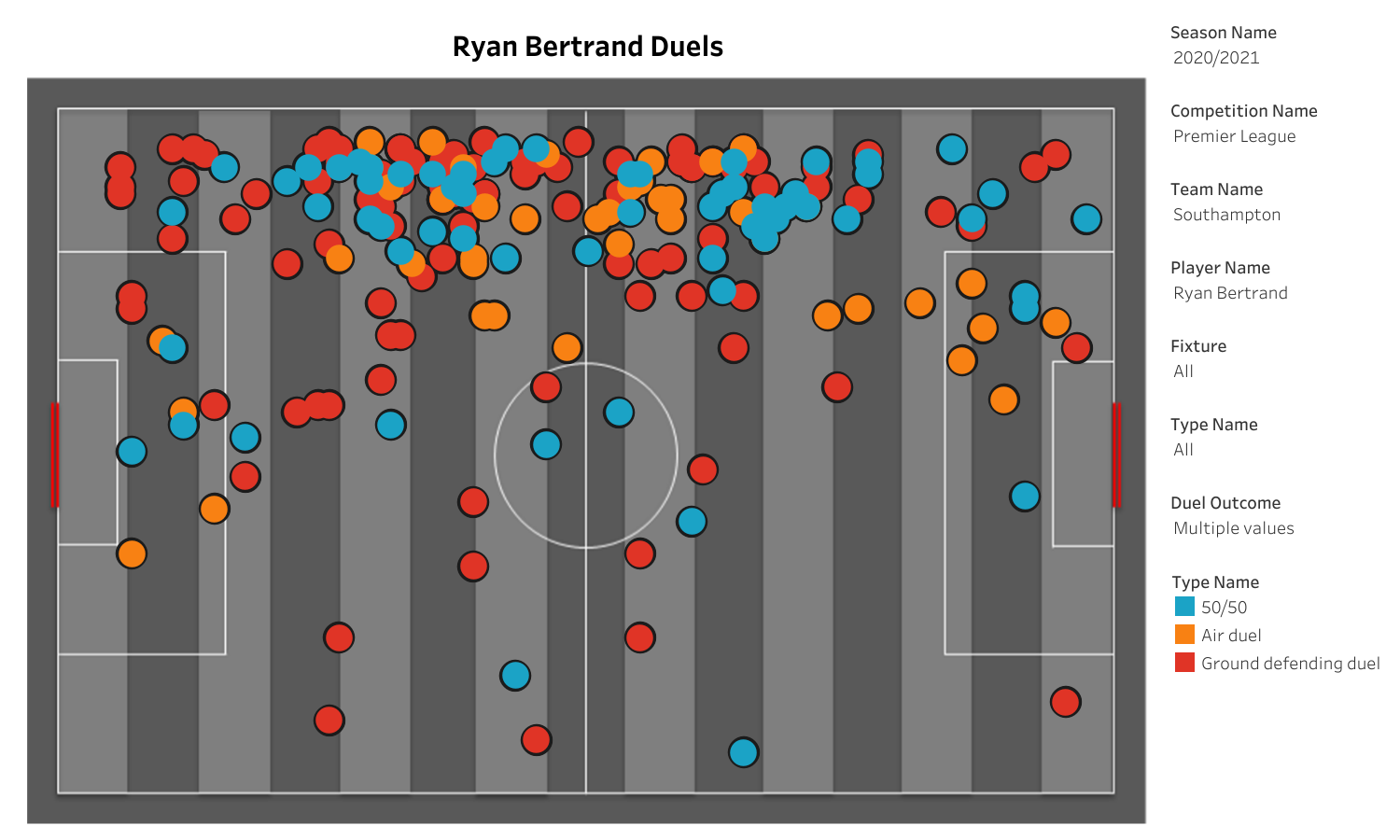 Bertrand was involved in 9.3 defensive actions and had a success rate of 83.74%. He contested 4.85 defensive duels, 3.08 aerial duels, and 2.99 loose ball duels per 90 minutes. The above viz shows all the duels that were won by the player or the duels that ended in a neutral result. Bertrand won 11.26% of defensive duels, 38.5% of aerial duels, and 46.2% of loose ball duels. Most of the duels were won in the middle third. This shows that Bertrand likes to play a high attacking line and remain a constant threat towards the opposition goal. 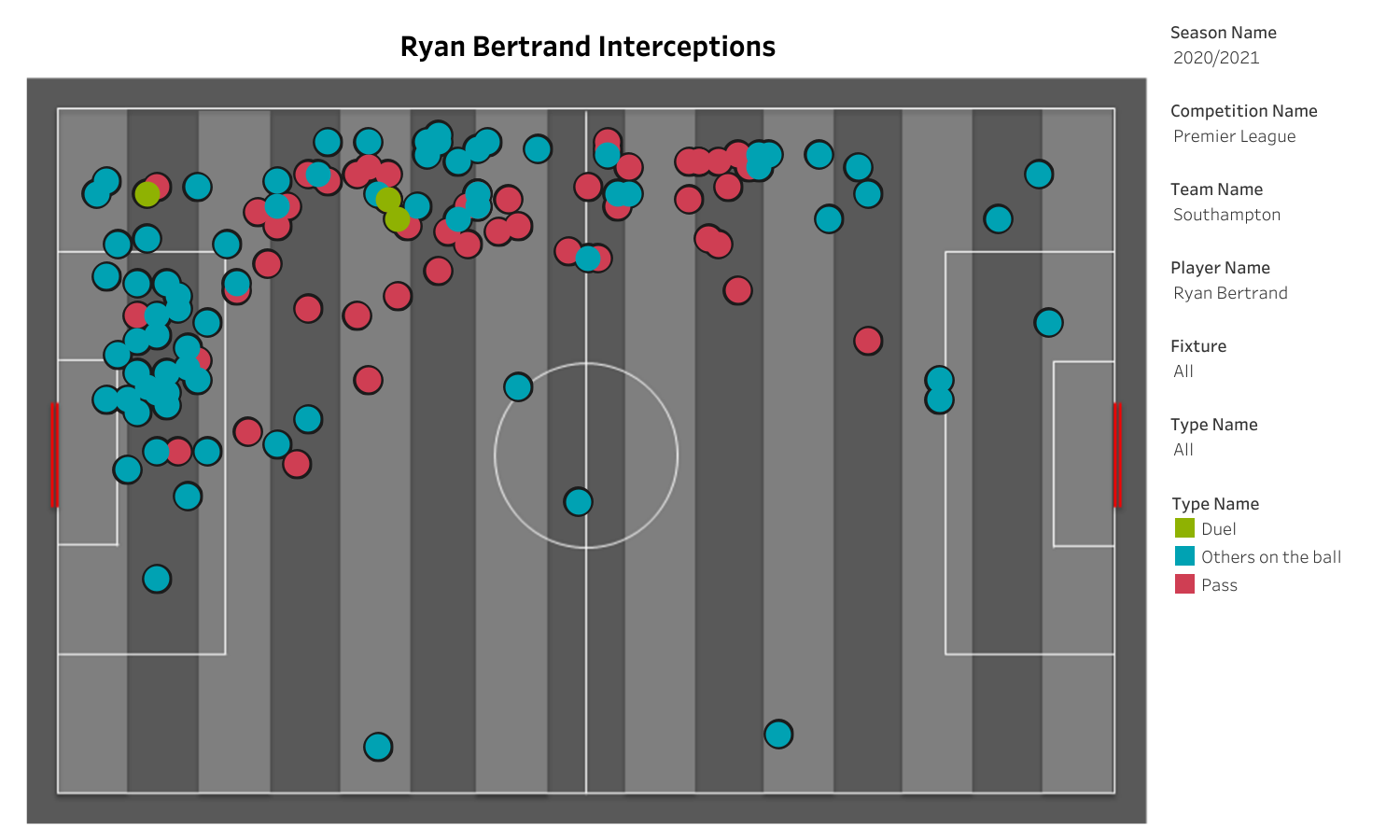 Ryan Bertrand will try to return to the team next season. His experience in the top flight will make him the first-choice left-back under Brendan Rodgers. He has performed decently and carries a lot of experience. Leicester City will also hope that the player remains fit and helps them to accomplish their goals.