Ademola Lookman is having a brilliant season. Not only he has been impactful for the Foxes, but this past month, he has also received his first call-up from his international team, Nigeria. Lookman arrived at the King Power Stadium on a season-long loan deal from RB Leipzig last year. His deal also includes an option to buy, and many Leicester fans are eager for their team to make Lookman’s deal permanent.

Brendan Rodgers has praised the winger, indicating that Leicester could offer a permanent contract if he continues his impressive form. The Northern Irish manager has stated that Lookman has made the impact that he was seeking in terms of goals and assists and that he is hoping for the winger to finish the season with double figures. The 24-year-old, who struggled to feature consistently in the starting XI in the past few seasons, has made 31 appearances in all competitions for the Foxes, scoring six times and adding a further five assists. He has put up impressive performances on both left and right wings, consistently involving himself in the play.

Lookman is having his most productive season, as he had failed to score more than five goals since the 2017/18 season. Although Harvey Barnes remains Rodgers’ first-choice for the left wing, the 24-year-old has been brilliant on either flank. With Leicester now looking more stable than they have been this season, as multiple starting XI players have returned from injury, Lookman might have to fight for his chances. However, the winger has displayed his capabilities and would get chances to continue his impressive form and wrap up the season on a high.

Let’s take a look at some stats to gauge whether Leicester should make Lookman’s deal permanent. 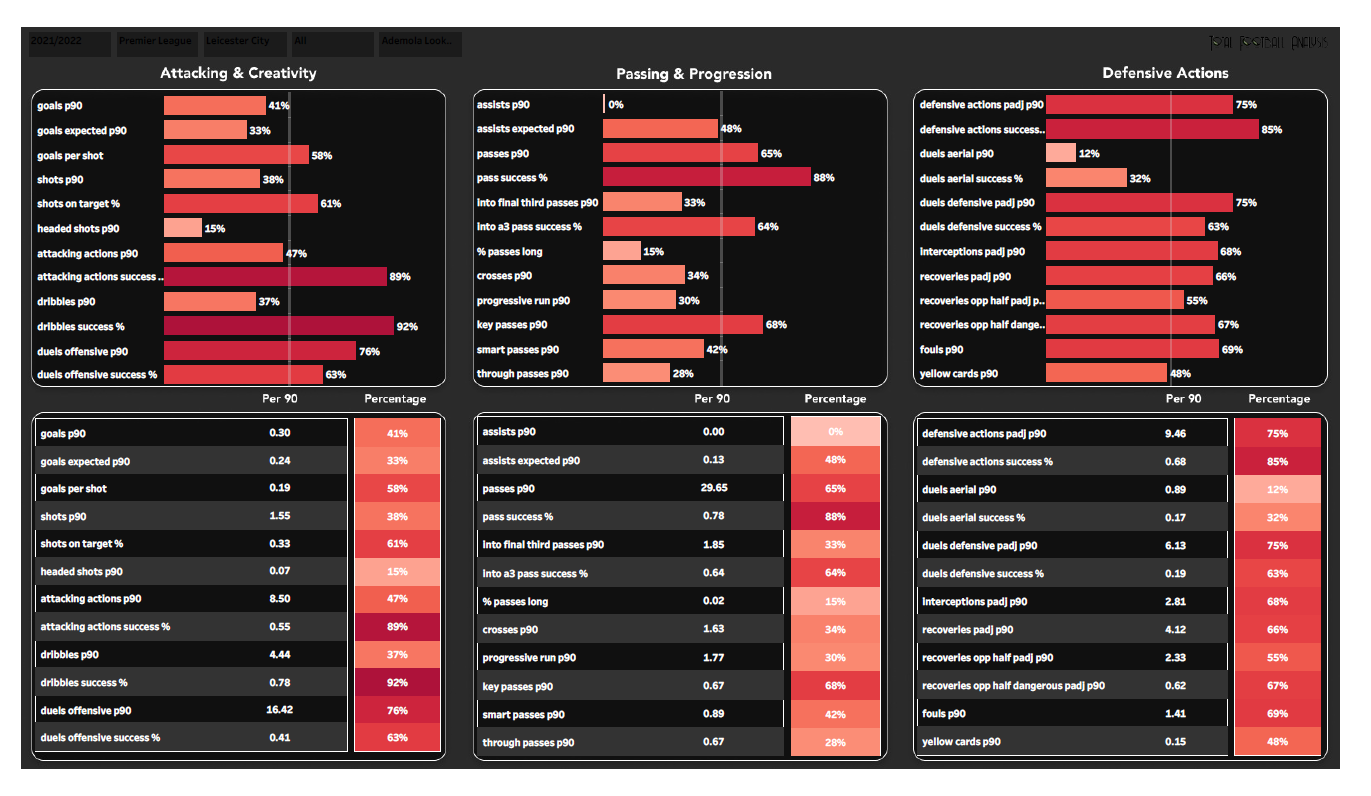 In the above viz, we can see Lookman’s overall stats in the Premier League this season. His most notable stats are attacking action success rate, dribbles success rate, and duels offensive per 90. Lookman excels at dribbling, as indicated in the above viz as well. He is effective in wide areas, utilizing his pace and frame to get in behind the defenders. The 24-year-old is adept at running at defenders, making his contribution through quick movements. He is agile and quick and possesses decent finishing ability. 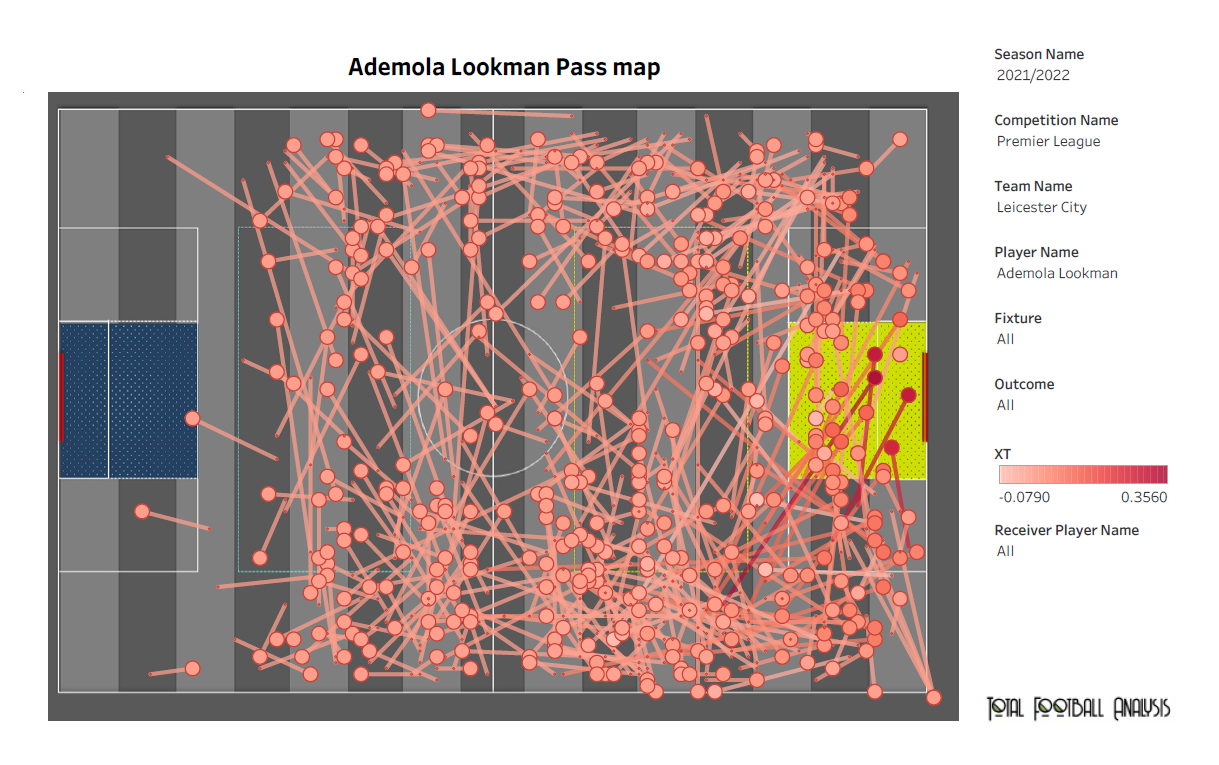 The above viz displays the locations of the pitch where Lookman has delivered his passes. We can see that he has made an impressive contribution on both the left and right wings. Some of his passes from the right carry a high expected threat. Lookman often looks to drop deep to create overloads and receive passes. He is usually involved during the build-up for Leicester’s attacks, contributing via his runs and dribbling. 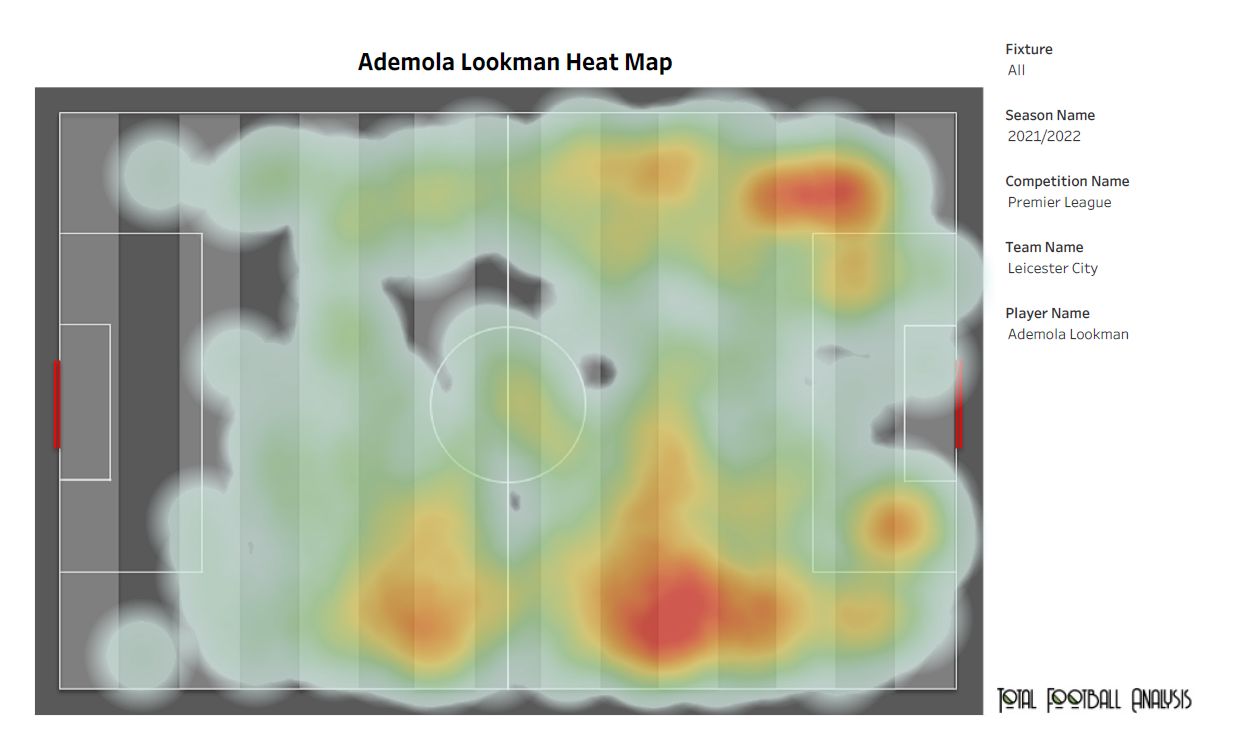 We can see the areas of the pitch where Lookman has been active in the above viz. The 24-year-old has covered the entire pitch, which indicates his impressive work rate. From infield, wide, and deeper and more defensive positions, Lookman has covered almost the entirety of the pitch. He often tracks back to his half to provide a passing outlet for his defenders or midfielders. The winger is comfortable as both left and right-winger or as an attacking midfielder. However, Rodgers has mostly deployed Lookman on the right wing.

Lookman would be a brilliant addition to Brendan Rodgers’ squad. His natural creativity, pace, dribbling ability, and defensive work rate make him an adept addition to Leicester.