Following two impressive seasons, Leicester City currently find themselves amid a battle for a mid-table finish. Their defensive frailties have seen them drop crucial points throughout the season. The Foxes have also crashed out of the Europa League and the FA Cup and are currently involved in the Europa Conference League. Leicester have been known to recruit shrewdly in the transfer market and have found many hidden talents over the years. Although not hidden, the Foxes recruited impressive players in the summer transfer window, talents who had demonstrated their qualities in the recent season. While some of the new signings, such as Ademola Lookman and Patson Daka have fared well, others such as Jaanik Vestergaard and Boubakary Soumare have failed to hit the ground running.

Soumare’s arrival at the King Power Stadium was seen by many as another one of winning strokes by Brendan Rodgers’ side in the transfer market. The Frenchman was instrumental in his previous season for Lille, as they won the Ligue 1 title. However, he has failed to replicate his form for the Foxes, struggling to adapt to the demands of the Premier League. In a recent interview, Rodgers expressed that Soumare needs to make multiple improvements to his game. Despite his underwhelming performances in previous weeks, Rodgers remains confident of the 22-year-old, stating that over the next few years, he can become an important part of the squad.

Let’s take a look at some stats to gauge Soumare’s best position in Rodger’s midfield. 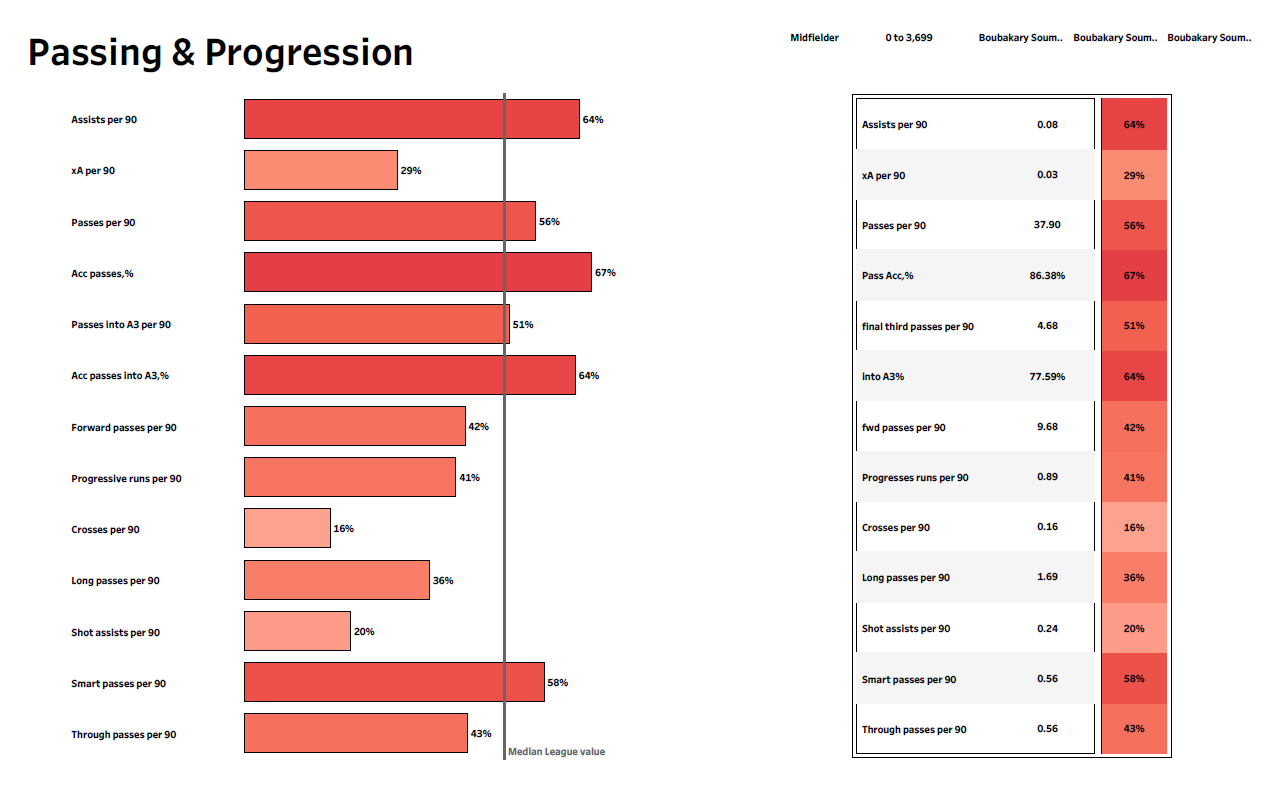 In the above viz., we can see Soumare’s passing & progression stats. While some of his stats are above the league median, many other stats are below the league median. Overall, we can see that Soumare has not been able to perform up to the standards that he had shown in previous seasons. Soumare has already shown glimpses of his talent as a player during his time with Lille. Last season, Soumare was one of the best in Ligue 1 in terms of ball progression. He was consistently involved in progressing the ball from deeper areas and into the opponent’s half. 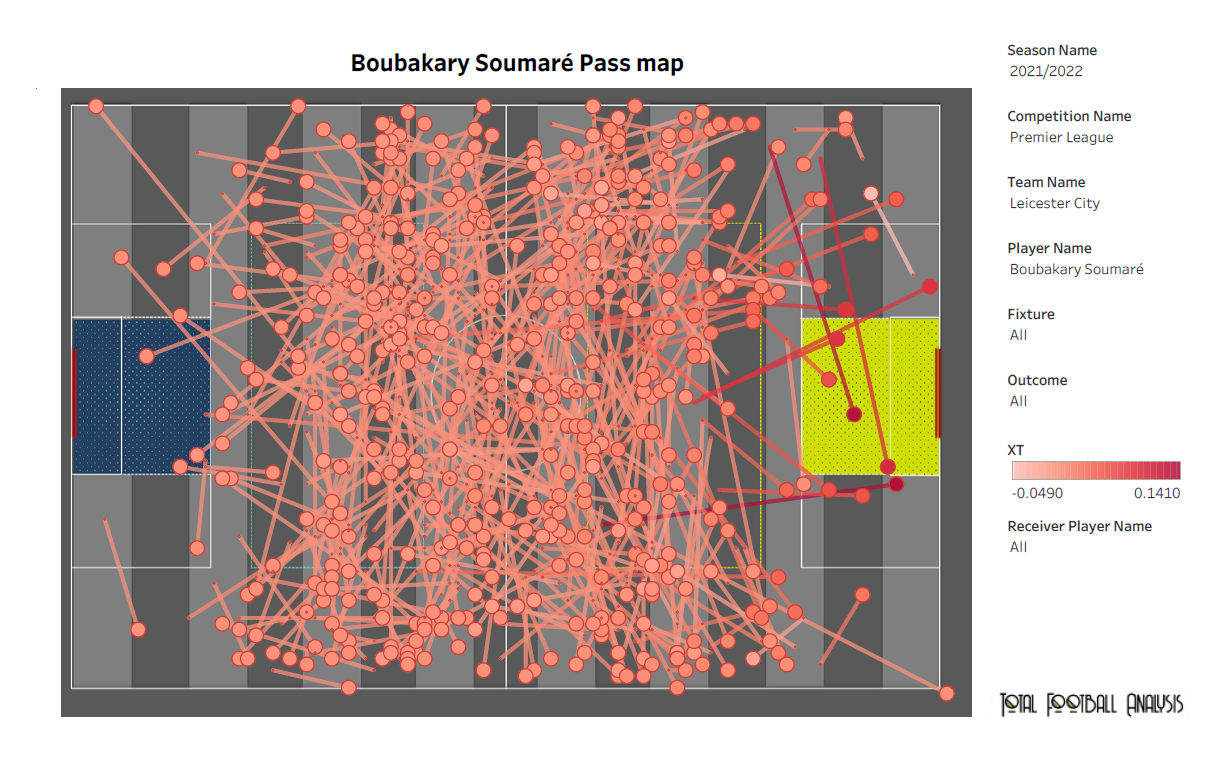 Soumare possesses an impressive passing range, and he is adept at switching the play from left to right with diagonal passes. His technique and angling of the passes make it tough for the opponents to read the direction of his passes. In the above viz., we can see the wide array of passes that the midfielder has delivered this season. Many of his long passes into the opponent’s box are threatening. One area where he has struggled this season is his tendency to dwell on the ball. In the Premier League, it is important to play with fewer touches and speed, and Soumare would need to adapt to that style. 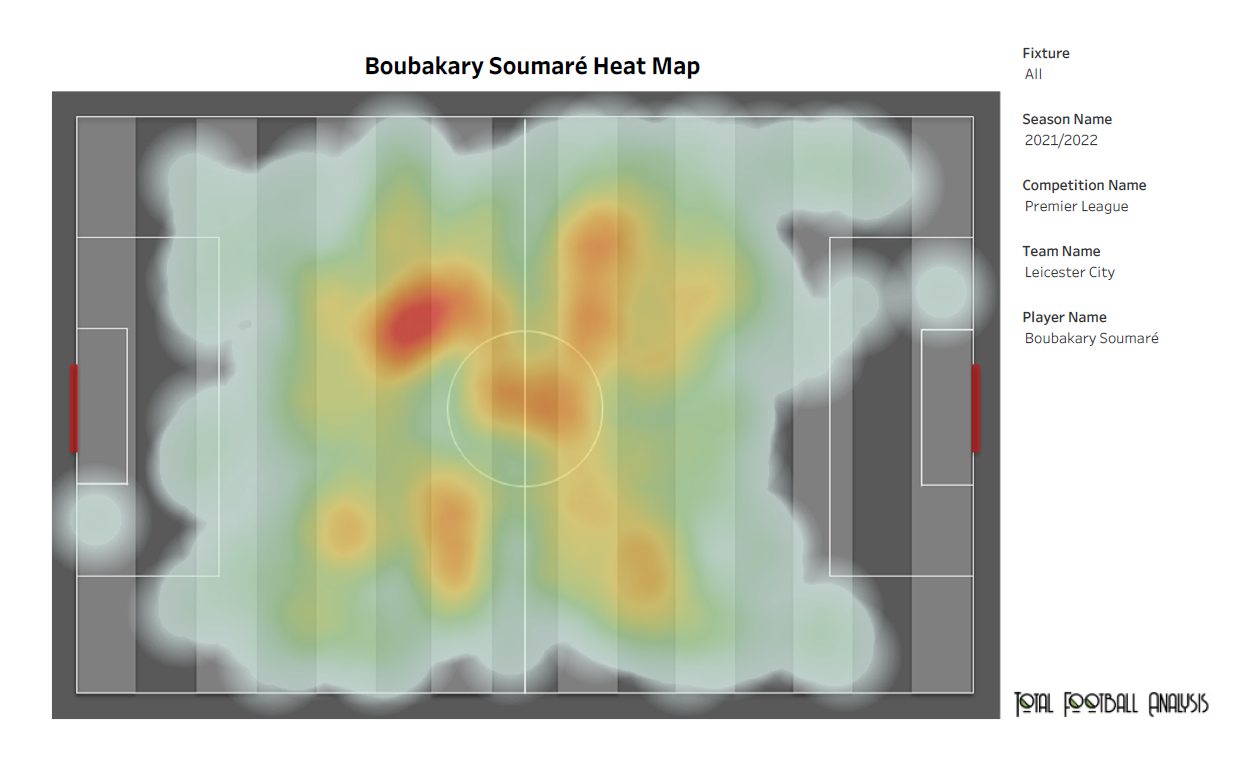 In the above heat map, we can see Soumare’s area of activity on the pitch. Soumare has been most active in his half on the left-side midfield channel. The Frenchman has covered the entirety of the pitch, indicating his impressive work rate. He has been involved in progressing the ball as well, as indicated by the above viz.

Based on his stats and attributes, Soumare is best suited as a replacement to Youri Tielemans. The Frenchman is a capable ball progressor, and his passing range is impressive. While he is still young and might become more versatile in the future, for the upcoming matches, Rodgers could also consider deploying him in the defensive midfield, given Leicester’s defensive troubles.