Leicester City defenders are having a season to forget. Yet again, they failed to keep things under control at the back. The Foxes have faced massive problems in defending set-pieces, and it was evident in the match against West Ham as they had to settle for a draw. Craig Dawson equalized from a Jarred Bowen corner during the injury time to save a point for his side. The drop in the form of many of Leicester’s defenders has been a cause for concern for Brendan Rodgers. One of those defenders, who has suffered a considerable decline in his form this season, has been the Turkish international, Calgar Soyuncu.

Since joining in the summer of 2018, Soyuncu had established himself as a key part of the Foxes’ backline. The 25-year-old had a breakthrough campaign during the 2019-20 season, and he was named in the PFA Team of the Year as well. He made 34 appearances in the Premier League that season and was one of the best defenders in the league. Soyuncu carried his impressive form onto the next season as well and was a reliable performer at the back, making 23 appearances. However, this season, the Turkish international’s form has declined, a scenario that mirrors Leicester’s overall defense.

Not only his tackle rate has dipped by four percent, but his passing accuracy has also declined by five percent in comparison to his breakthrough 2019-20 season. Leicester City have conceded 12 more Premier League goals than relegation-threatened Burnley this season. They have now conceded 62 goals across all competitions. Soyuncu’s inconsistent form has seen him drop to the bench often this season. Rodgers has deployed Ndidi as a centre-back to cover for the poor form of his defenders.

Let’s take a look at Soyuncu’s stats to gauge whether the defender needs to be replaced. 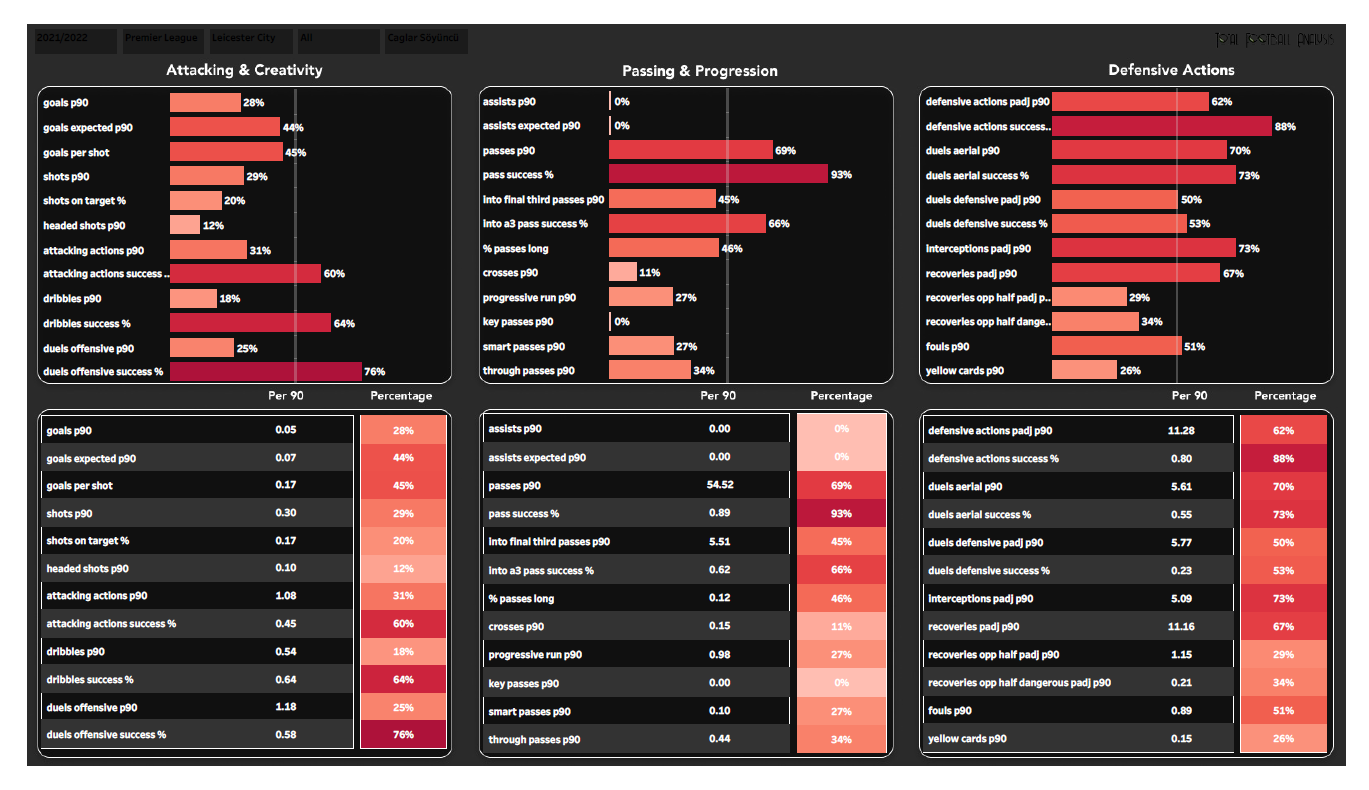 In the above viz., we can see Soyuncu’s overall stats in the Premier League. While most of his defensive stats are above the league median, Soyuncu has been error-prone and unassured at the back. Soyuncu’s tackle success rate has dipped by 4% from the previous season. In his 23 appearances last season, Soyuncu had lost a total of 73 duels, while in the current season, he has already lost 70 in 19 appearances. We can see in the above stats that his average defensive duels and successful defensive duels have been average. The Turkish international has been poor in terms of average recoveries in the opponent’s half as well. 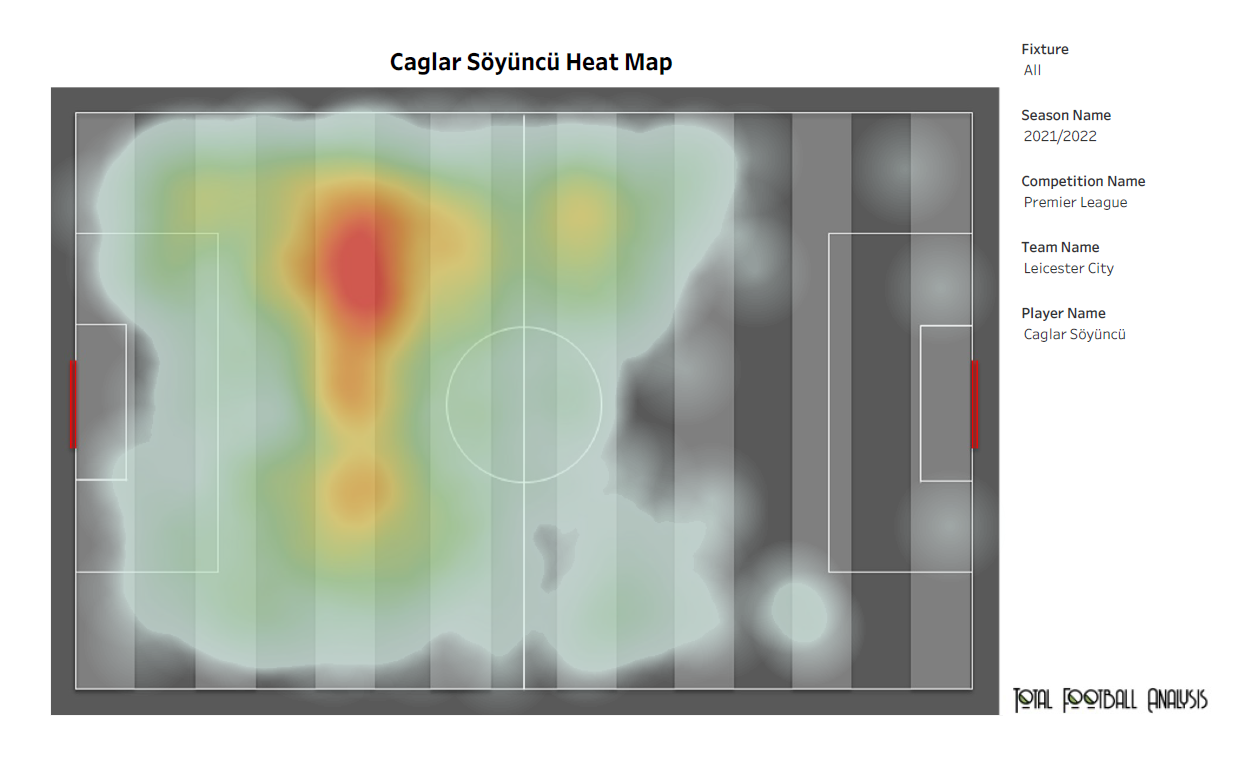 The above viz highlights the locations on the pitch where Soyuncu is most active. We can see that he has mostly been found in his half near the left flank. In the past seasons, Soyuncu demonstrated his positional awareness with his ability to react to threatening situations. He was a dominant figure in the air with a high success rate in aerial duels. In the current season, Soyuncu has lost 34 aerial duels already, while he lost 36 throughout the season. 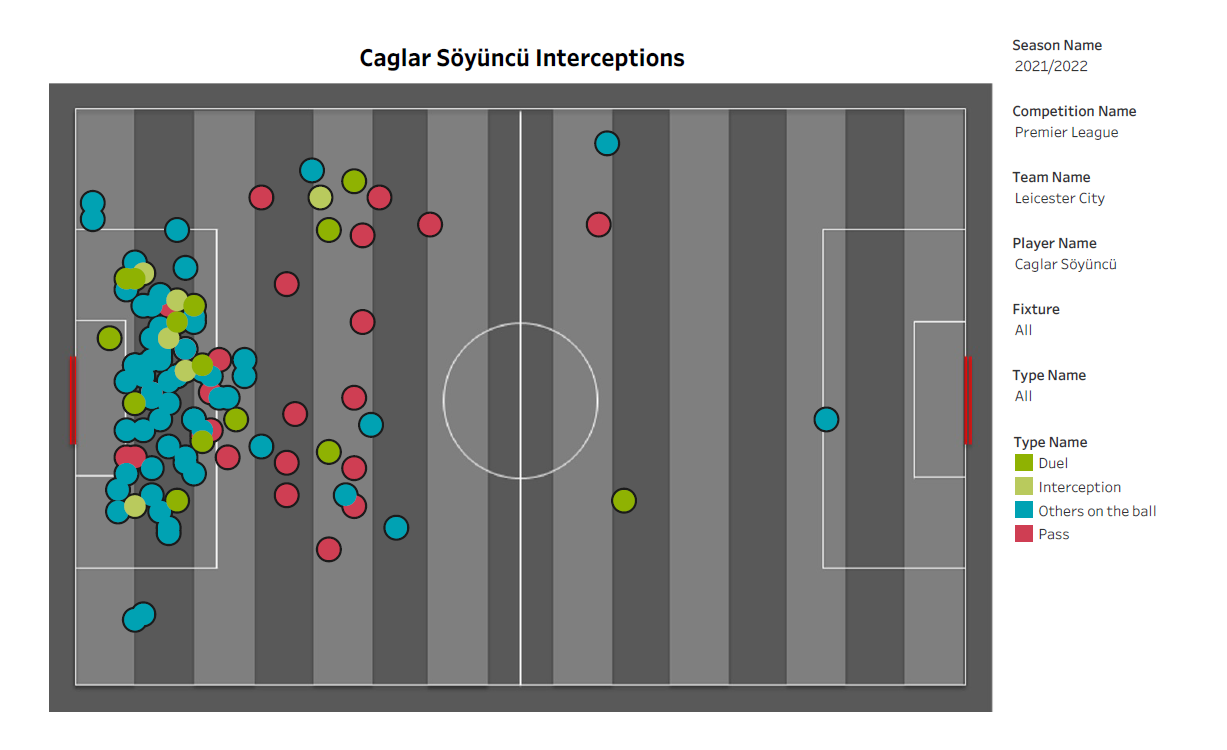 We can see the locations on the pitch where Soyuncu has engaged in duels and interceptions. Soyuncu’s awareness and reading of the game combined with his physicality make him a strong opponent during a one-on-one duel. However, he seems to have lost his confidence in his duels. We can see that most of his interceptions have been inside the box in his defensive half, indicating that he has failed to snuff out the opponent’s threat.

While he is not the sole reason for Leicester’s poor defensive form this season, Soyuncu’s decline in form has given Rodgers a selection headache. He has been forced to use Ndidi as a centre-back as the Foxes’ defenders have failed to inspire confidence. The stats and performances point towards a decline in the form of the Turkish international, and the Foxes could very well be forced to seek a permanent replacement for the defender if his form does not improve dramatically.