Leicester City’s recent 2-2 draw against West Ham saw the return of Portuguese full-back, Ricardo Pereira to Rodgers’ starting lineup. The 28-year-old marked his return with his first goal for the club in almost two years after suffering a knee injury. The appearance against West Ham was Pereira’s first since December. The full-back headed home a cross from Harvey Barnes in the 57th minute to give his side the lead, but ultimately the Foxes’ defense let them down yet again.

Despite his side’s defensive issues, Pereira has displayed signs that he is getting closer to replicating the level that he achieved before his knee injury in 2020. Pereira looked solid during the defensive phases and was effective in his pressing of the West Ham forwards. He was a threat going forward as well as he has been many times over the years. Following his return from his knee injury, Pereira has only started in 25 matches in all competitions. His performance on the weekend could be a sign for things to come as Rodgers’ defence has struggled all throughout the season.

So far, the Portuguese fullback has made nine appearances in the Premier League, scoring one goal and laying two assists. The full-back remarked after his side’s draw against West Ham, that Leicester need to focus on the positive aspects of the game while also considering the disappointing moments. 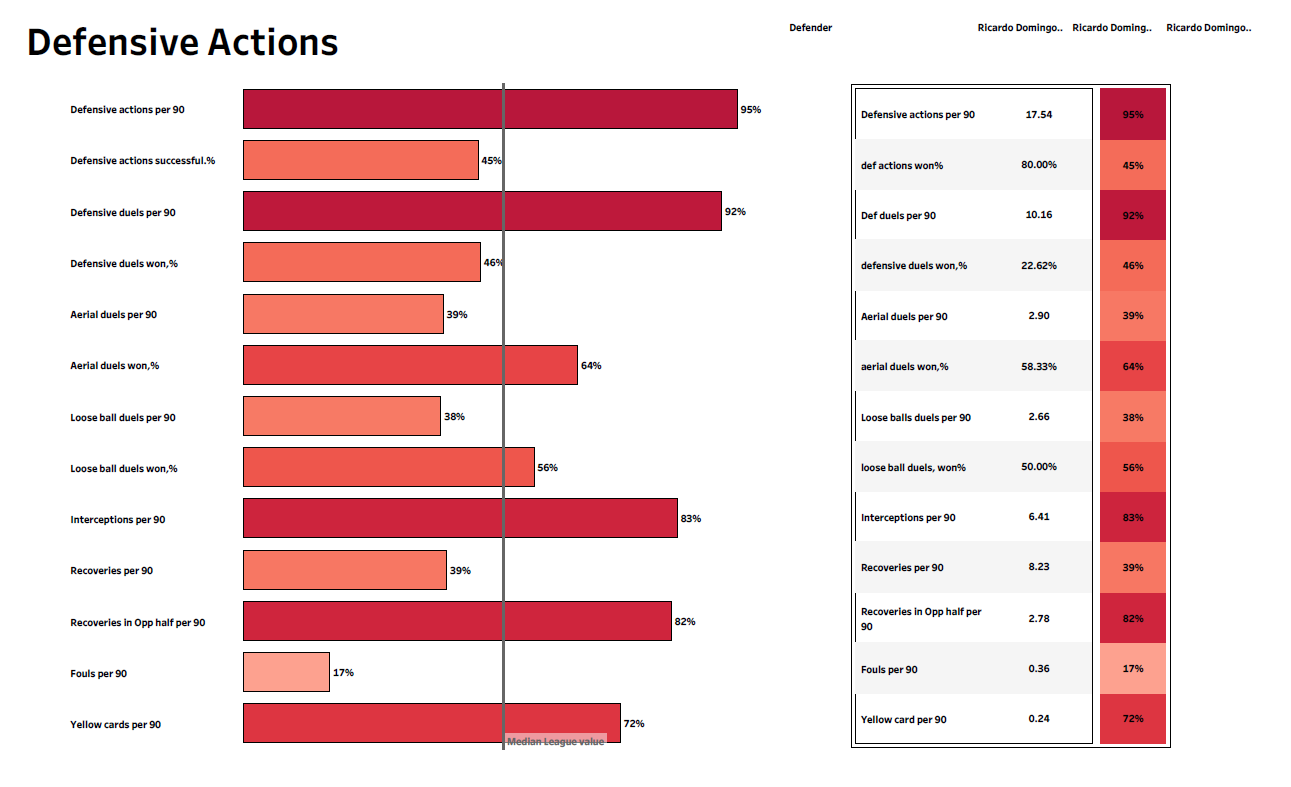 In the above viz., we can see Pereira’s defensive stats from this season. The majority of his stats are above the league median, indicating that he has been overall defensively solid. His most notable defensive stats are defensive duels per 90, interceptions per 90, and recoveries in the opponent’s half per 90. In addition, the Portuguese has also been solid in his aerial duels with a success rate of 58.33%. Pereira is known for his stamina, pace, and acceleration. His physical ability combined with his crossing make him an adept full-back. 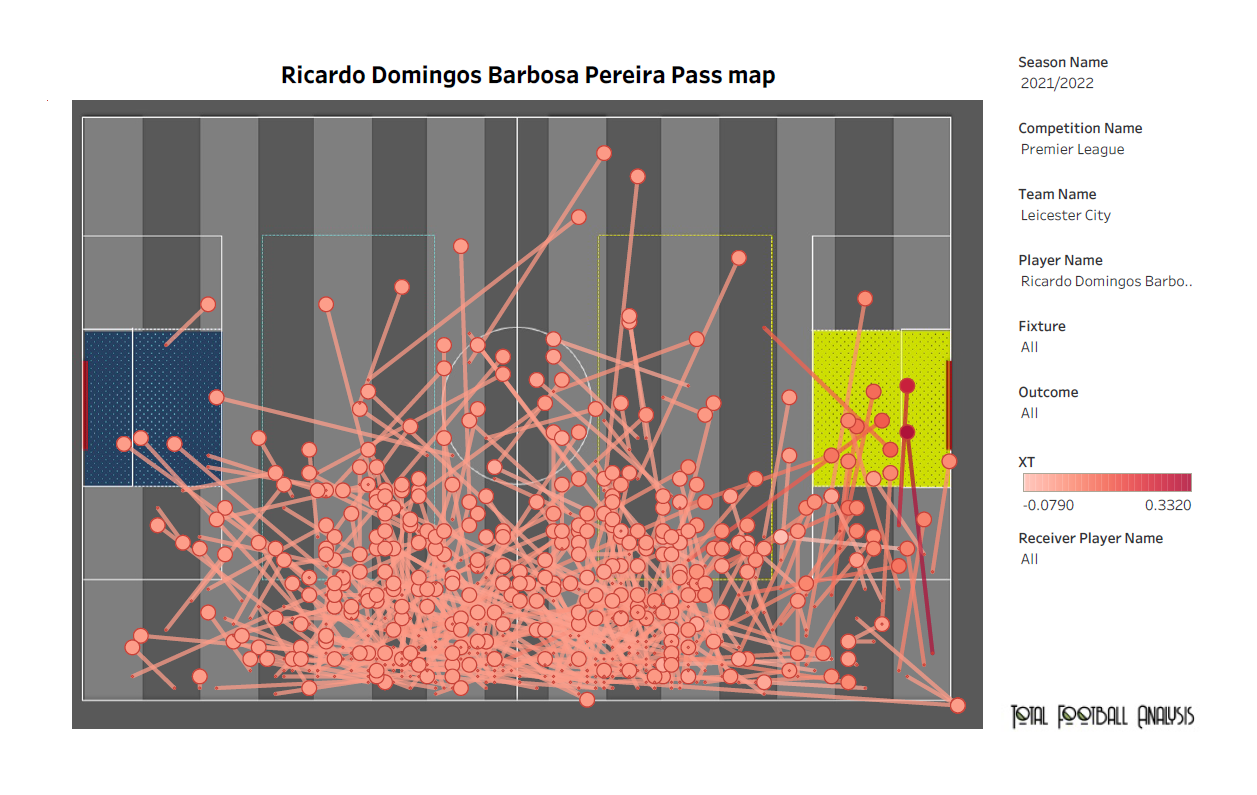 The above viz. highlights the areas of the pitch where Pereira has delivered his wide array of passes and crosses. His tenacity and aggression allow him to produce high offensive numbers. Pereira’s change of pace is impressive, and it allows him to dribble effectively. Pereira is capable of handling the space near the wing as he pushes the ball to the right before attempting to find a teammate or putting in a cross directly into the box. At times, he can also cut inward and play near the central positions. 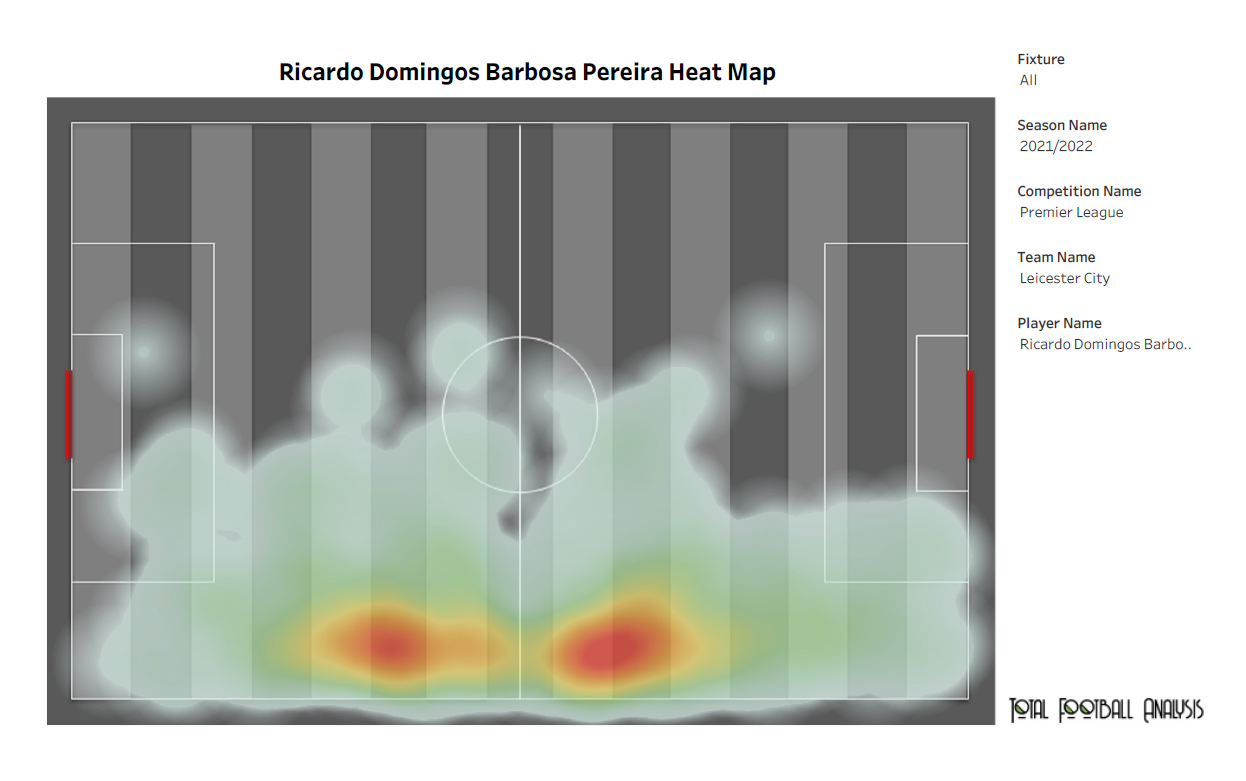 The above ‘heat map’ indicates the locations on the pitch where Pereira is most active. We can see that Pereira covers almost half the pitch vertically with his movements. He has mostly occupied the spaces near the touchline while also drifting near the central areas of the pitch. Although his preferred position is right-back, the Portuguese is versatile and can slot in at left-back as well. In the past, Pereira has also featured as a right midfielder.

It was reported in January that Pereira held positive talks over extending his contract. If he can get back to his previous levels of fitness and performance, the 28-year-old would prove to be a massive asset for Leicester. Leicester are in dire need of defensive depth, and Pereira could aid his side in that department.