Following a four-match unbeaten run in all competitions, Leicester City slumped to a defeat again. A 0-2 defeat against Arsenal leaves Brendan Rodgers’ side still at the 12th spot in the league, with 33 points in 26 matches. The opening goal was scored by Thomas Partey when his run was left unchecked by Leicester’s defenders. The second goal was a penalty scored by Lacazatte, following a handball by Soyuncu. The Foxes’ struggles to defend the set-pieces were again highlighted in the defeat. Barring the penalties, Leicester have conceded 15 goals from set-pieces, a number which is currently the highest in the league.

Rodgers’ starting lineup in the build-up to the match was confusing for many fans and pundits as Wilfred Ndidi, one of Leicester’s most consistent performers amidst a season full of inconsistencies, was not in the starting lineup. Although the Nigerian midfielder was brought in the 61st minute.

Since the start of the season, Ndidi has been one of Rodgers’ most relied upon players. The Nigerian powerhouse has made 19 appearances, starting in 18. The 25-year-old has been steady in the defensive midfield role for the Foxes while also featuring as a centre-back in a few matches. In an interview last month, Rodgers highlighted the importance of Ndidi, stating that the Nigerian’s experience, physicality, and dedication have been of massive aid. Ndidi has generated a lot of interest from top European clubs since he arrived at King Power Stadium in 2017, however, Leicester have maintained their desire to keep hold of the midfielder.

Let’s take a look at some stats to gauge just how crucial has the Nigerian midfielder been for the Foxes. 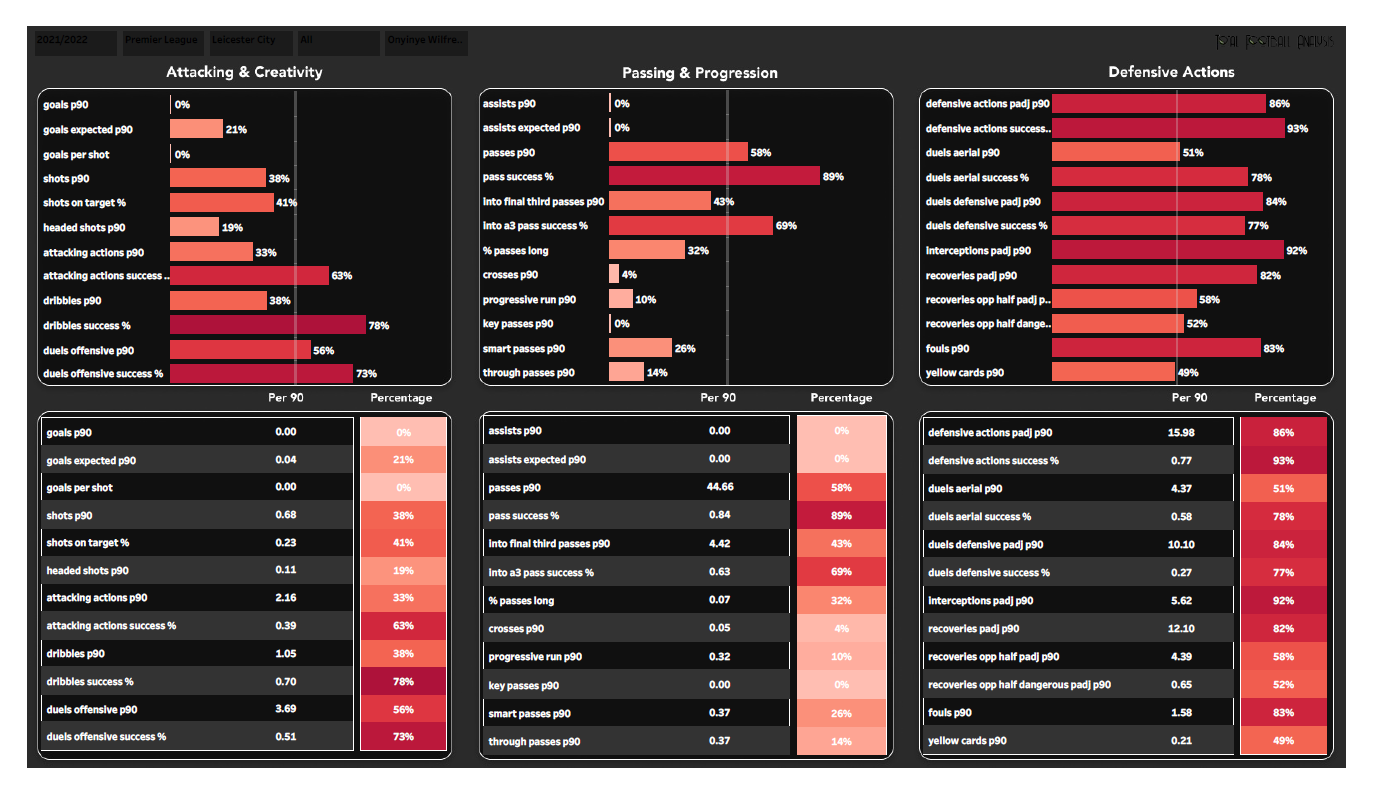 In the above viz., we can see Ndidi’s overall stats in the league this season. Ndidi’s defensive stats are some of the best in the league, as he ranks highly in terms of multiple metrics. His most notable defensive stats are defensive actions successful rate, interceptions per 90, and defensive duels per 90. In addition, he averages upward of 12 recoveries and more than 10 defensive duels per match. Ndidi is not only a high-volume tackle but an efficient one too. His role during possession is limited, as he is more of an enabler. However, his movement on the pitch still contributes to his side’s build-up play. 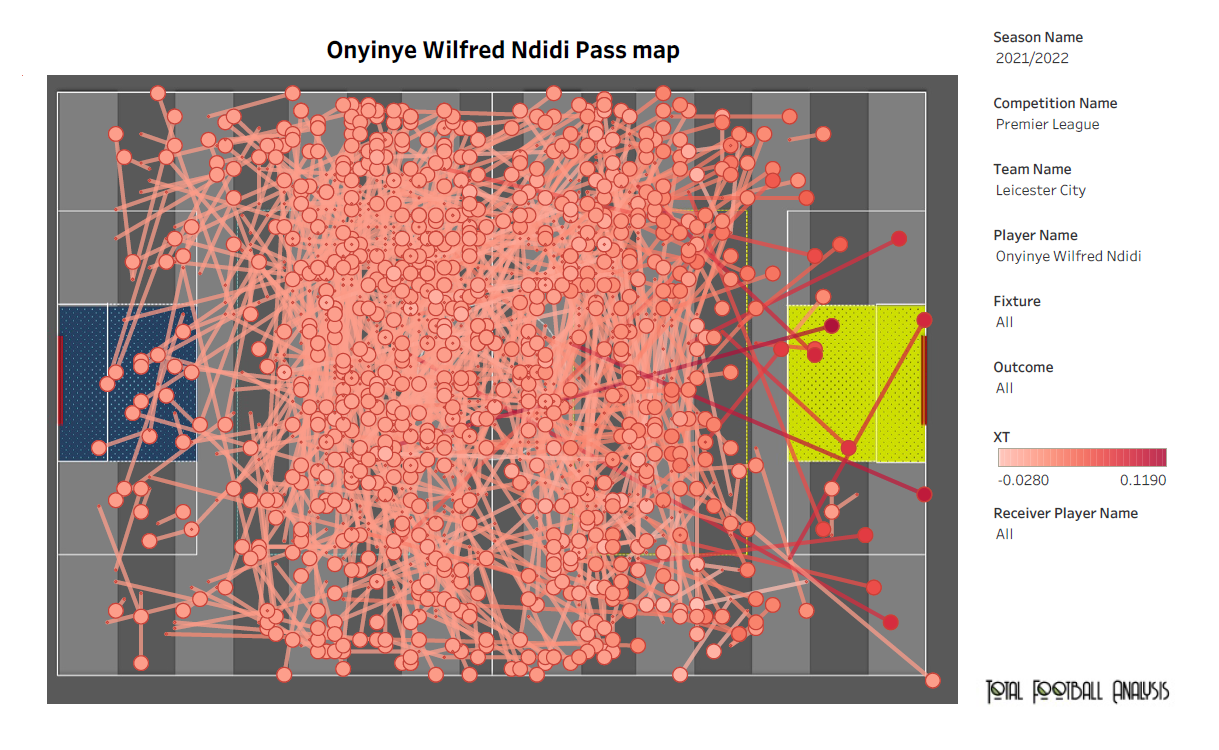 The above viz displays the areas of the pitch where Ndidi has delivered his passes. We can see that he has delivered passes all over the pitch. Some of his passes near the opposition box carry a high threat. Ndidi is adept at interceptions and is capable of winning a tackle at ease. The Nigerian’s physicality aids him in dominating defensive duels. His aerial threat from set-pieces can also be vital when under pressure, especially in the opposition’s box. 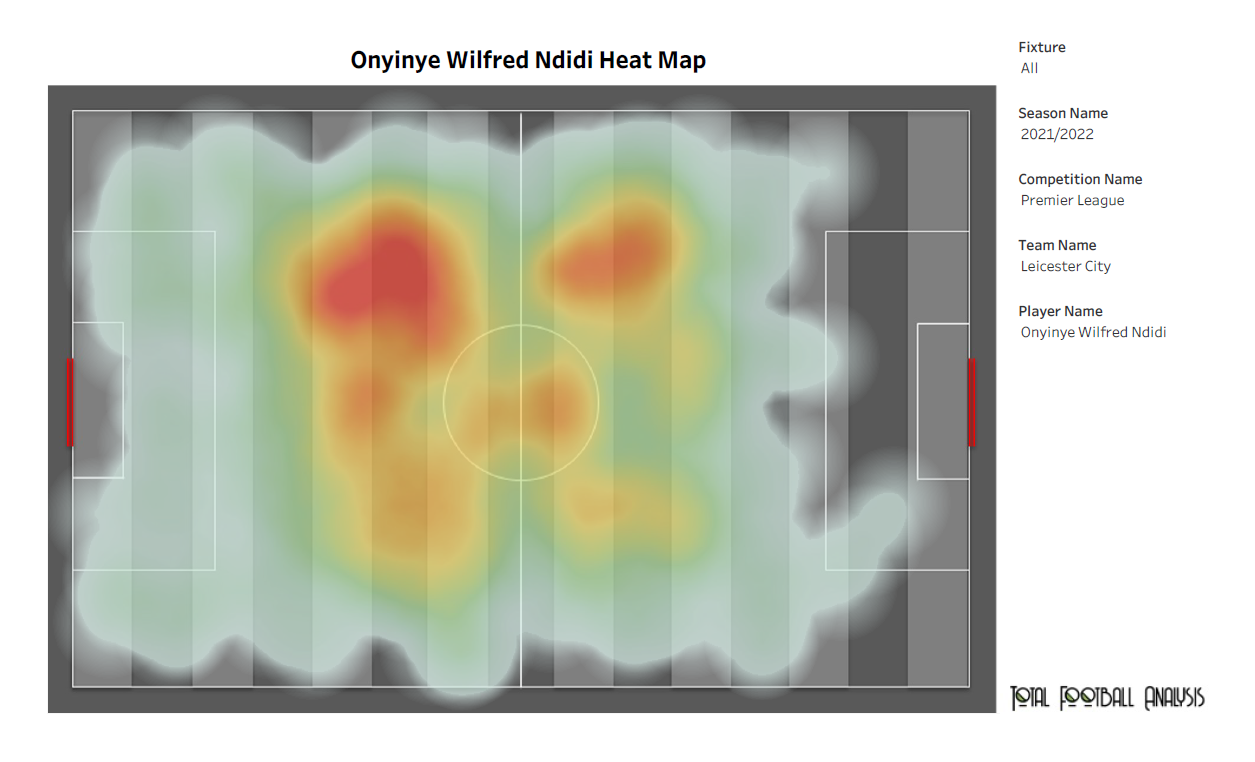 In the above viz, we can see the areas of the pitch where he is most active. Ndidi is a midfield powerhouse and an engine, as evident in the viz above. He has mostly occupied spaces in front of his defense while also moving into the opposition’s half during transitions. While most of his appearances have been as a defensive midfielder, Ndidi has also featured as a centre-back.

Since he arrived at Leicester, Ndidi has been instrumental for the Foxes. He has transformed into one of the best defensive midfielders in the Premier League. While Leicester’s form has been inconsistent all season, Ndidi has maintained his steady performances in the midfield.